On October 22nd in Club Penguin History there were multiple updates in the year of 2010. For starters, the Bat Pin was hidden at the Cove over in the bottom left corner. 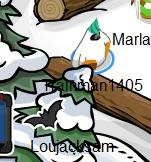 There was also a new login screen advertising the Halloween Party. It featured three penguins, a dark forest background with cloudy skies, and text reading “Join the candy hunt. Beware the storm… Starting Oct. 29”. Another preparation for the 2010 Halloween Party that was also released was storm clouds forming in the binoculars at the Cove.