Amazon now lists the new upcoming Club Penguin song! It is called Ghosts Just Wanna Dance and is by the Penguin Band but also features Cadence. 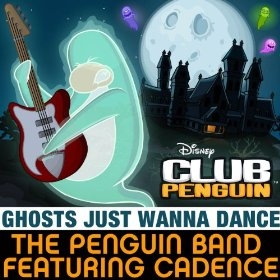 Ghosts Just Wanna Dance will be Club Penguin’s third song. The first one was The Party Starts Now which was sung by Cadence, released in July of this year. Last month the Penguin Band released their song Anchors Aweigh. This third song will be by both mascot singers. It will be released on The 7th of October and will cost the same price as the previous songs.