The Trainman1405 In Real Life series is slowly coming to an end with just a few more weeks of posts left, but that doesn’t mean I’m out of things to share about my life yet! As all of you know, my penguin’s name is Trainman1405. I made this penguin when I was eleven years old. How did I pick that name? I was fascinated by trains, of course! Ever since I was a little kid I enjoyed trains – regular trains, model trains, even Thomas the Tank Engine trains. My father had several model trains and my uncle had a small train layout. From time to time I would be taken to big model train layouts open to the public. When I was young I visited one in Minnesota with my uncle, I went to a train expo in Maryland, and I’ve ever been to the The Choo Choo Barn several times. (Note: None of these places are remotely close to where I live)

So with that said, trains have always been a passion/hobby for me. When I was younger, age 9 back in 2004, Santa brought me the Polar Express train set. Before then my uncle had me subscribed to the Classic Toy Trains magazine (and still am!) so I’d look at pictures and read the articles. This, however, was my first own model train with the exception of the wooden Thomas ones. From then on, Santa would bring me trains each year at Christmas. I’d also purchase some stuff with my own money and even get a little something from my parents for my birthday. 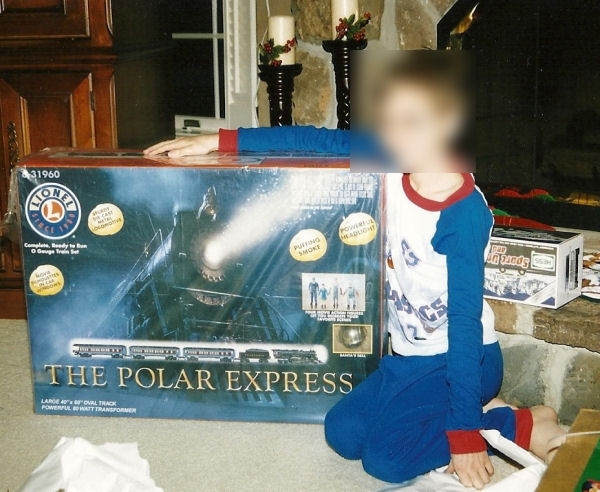 In 2006 I got this for my birthday. This was roughly two months before I joined Club Penguin. 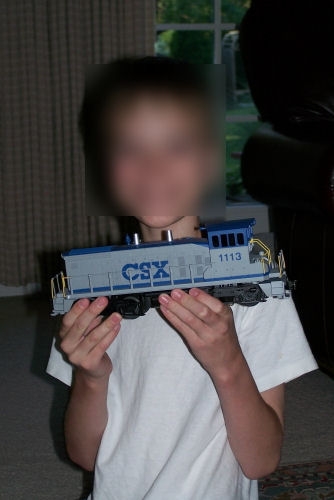 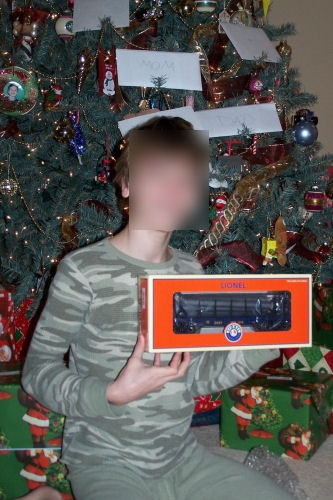 Now, when I got the Polar Express train set I had it set up on the ground. However, as I got more stuff we needed a more permanent solution – so my parents purchased a 4 feet by 8 feet board. (rectangle) I later purchased two more, so I have triple the amount of space. My boards are spaced out like this: | | |

So, since I got the Polar Express train set I’ve since purchased and received many more train objects for the layout. Since I have a wide variety of things, I set it up so each board of wood had a different theme, but was all connected. One is regular, one is Winter, and the other is Halloween. Below I’ve got a collection of pictures and a video showcasing it all. It was all done with my iPod, so the quality is rather poor. 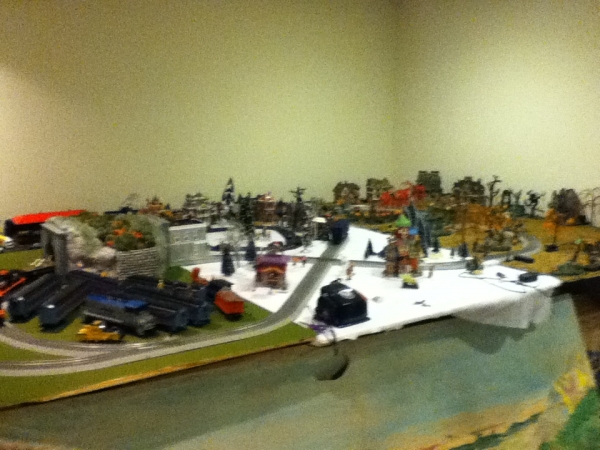 However, before I show you more, let’s back up a bit. I redo my train layout a lot – I take everything down and then redo it. I’ve done this over ten times in the past few years now. Last August I moved, so I was forced to redo it. I ended up doing it in November 2011 after having moved into the house and settling in for a few months.

Here’s the boards and boxes containing everything. 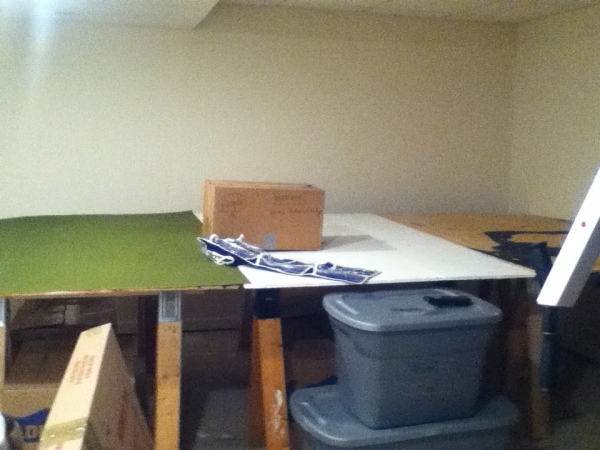 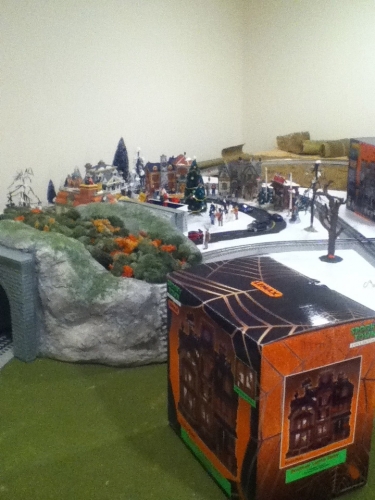 Almost done setting up everything, I just had to wire everything at this point. 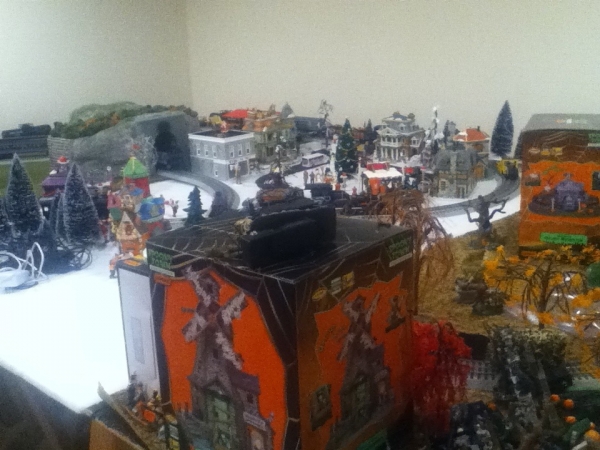 Okay, back to the present with everything done. Here’s a photo with all my trains: 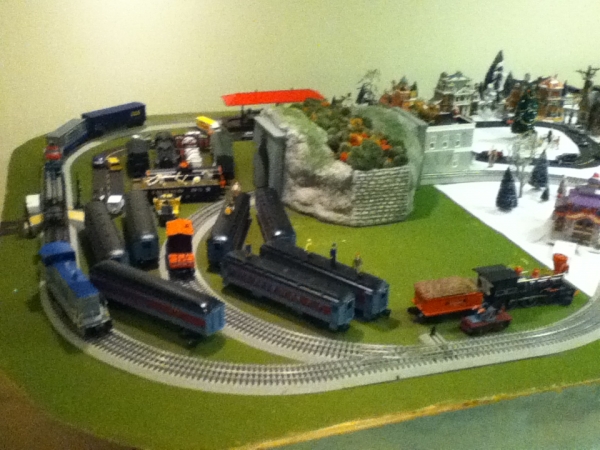 This Halloween Train is actually a pretty cool story. Back in fourth grade, in early 2006, I had really wanted this certain model train. The problem was, it was discontinued. I ended up writing a letter to Lionel, the maker of the train, asking if they had any left and that I’d even be willing to pay. I introduced myself and everything in the letter – in fact, I found a copy of it. This is what I wrote: 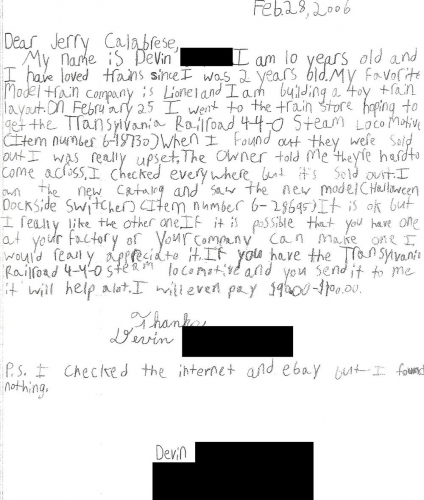 Nothing was heard back – or so I thought. On October 13, 2006 (my mom wrote all these dates down, I don’t have extraordinary memory) a package randomly arrived at our house. Nobody had ordered anything, so we didn’t know who it was from. It was addressed as from Lionel. (my mom even saved the envelope, haha) I opened the package, and inside it was the discontinued train that I wanted. I’m pretty sure my mom was more excited than I was – she was practically screaming with joy and immediately called up all our relatives to tell them that I got this train for free after writing to the company many months ago. It was cool – I wrote to a company (I had addressed it to the CEO of the company at the time) explaining how much I wanted it, didn’t hear anything, and many months later a package with it showed up at my door from the company. This thing wasn’t cheap, either – it would have been $100 at the store. It also came with a note back – it said that they were doing cleaning and came across the letter wedged between two desks. This was the letter. It wasn’t from the CEO, but instead someone from the company. 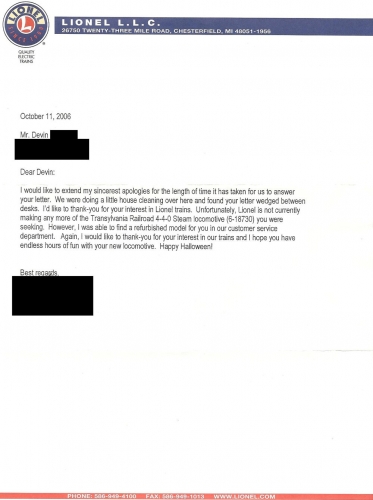 …and then my mom had me write a letter back. 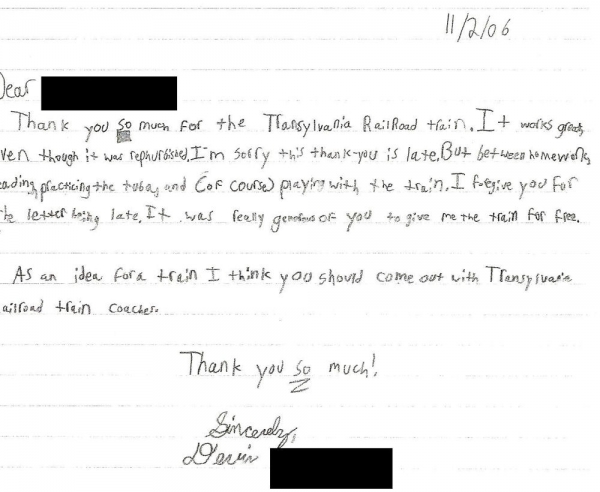 Okay, that was the last distraction. Here are photos of my current train layout. This is the Halloween train that I did end up getting from Lionel, the one I wanted. It still runs perfect. 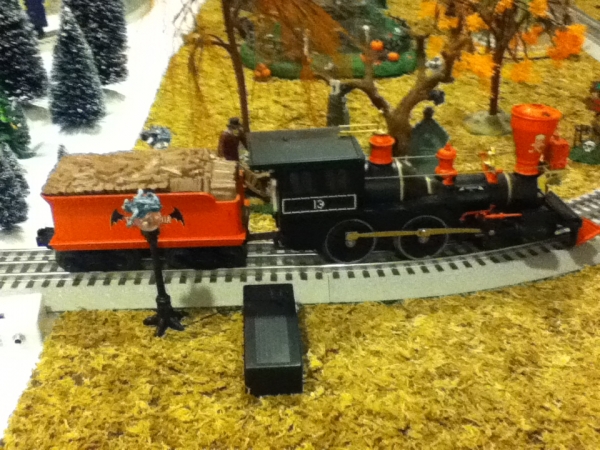 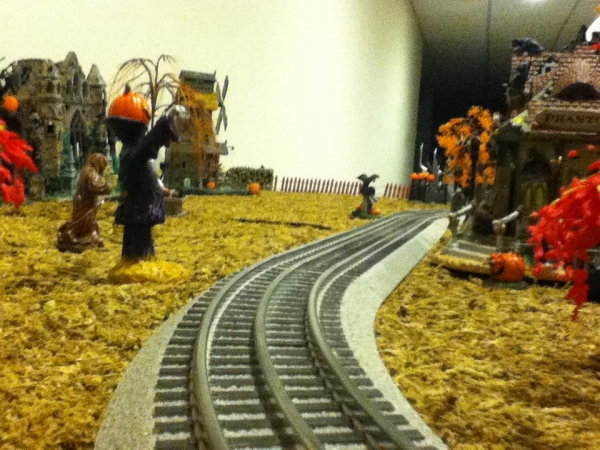 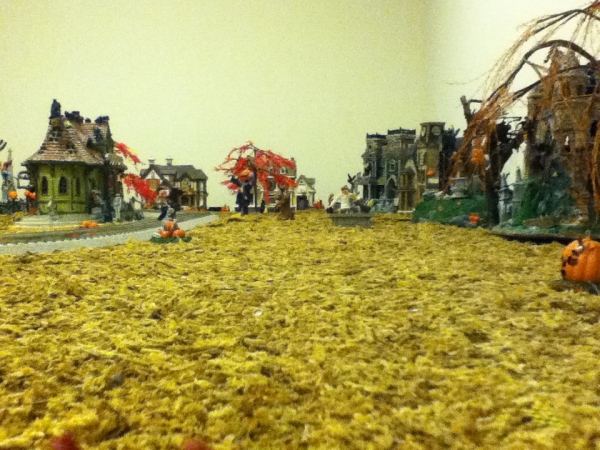 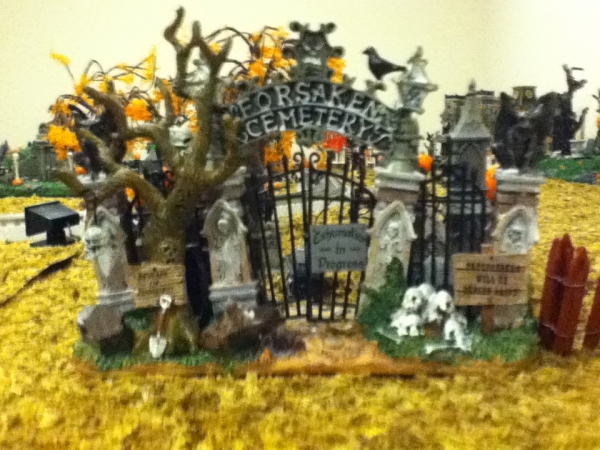 Christmas/Winter section: (again, mainly from Lemax – the stuff sure is expensive when added up! :P) 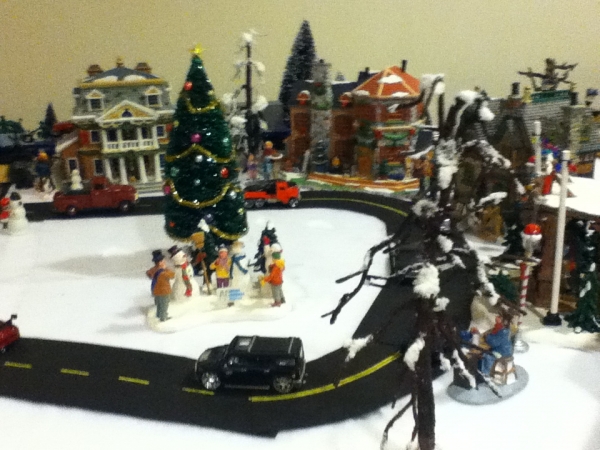 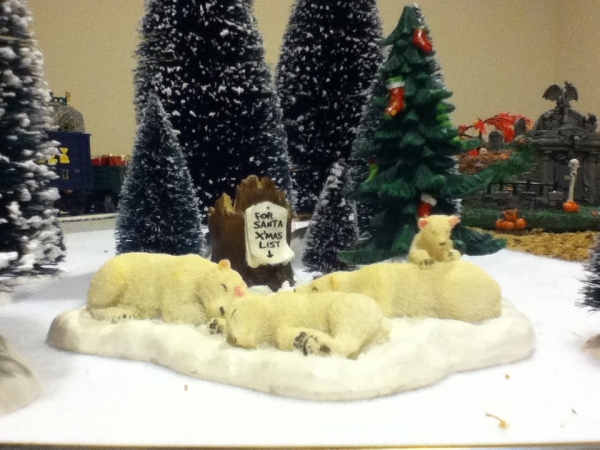 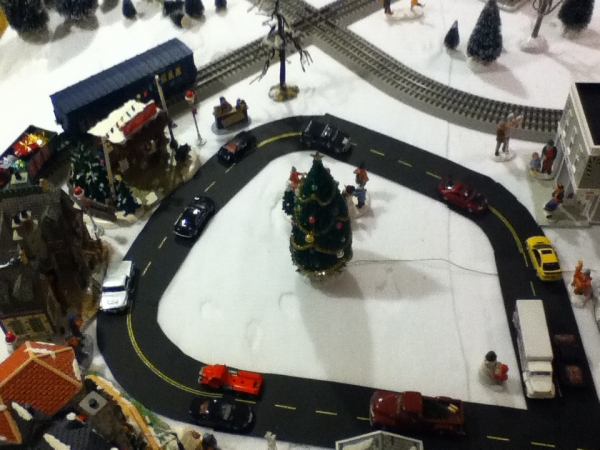 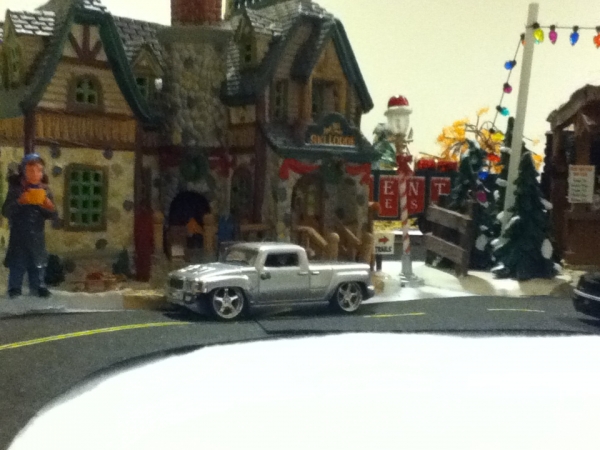 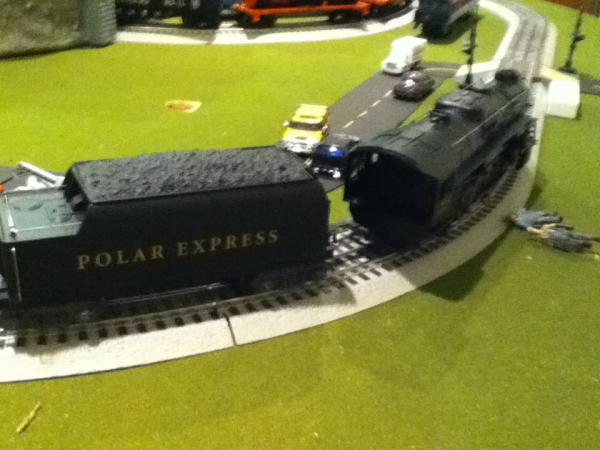 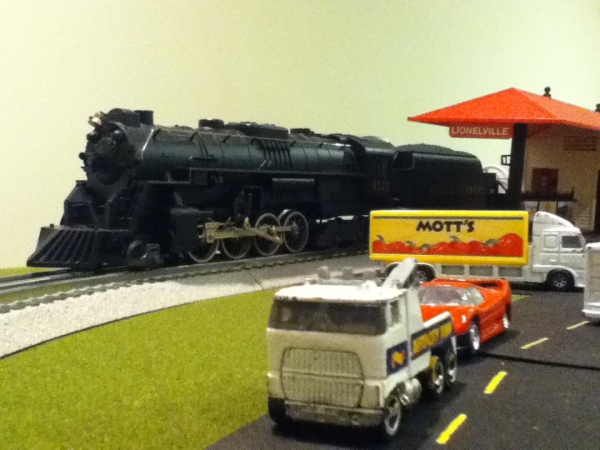 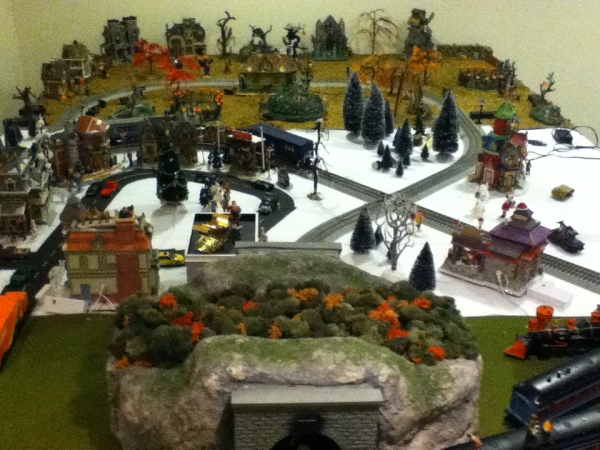 Here’s a little something by Grandpa and his friends painted when they were kids/teenagers. It’s old and a bit ratty (and holed) but I still have it: 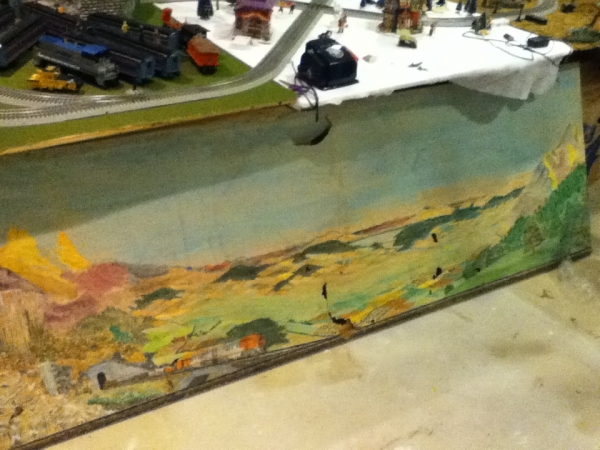 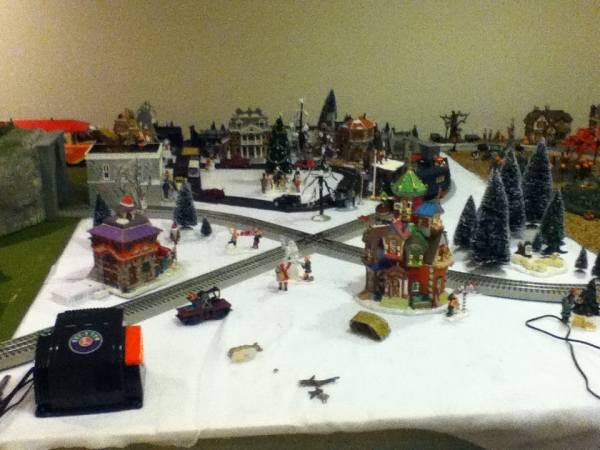 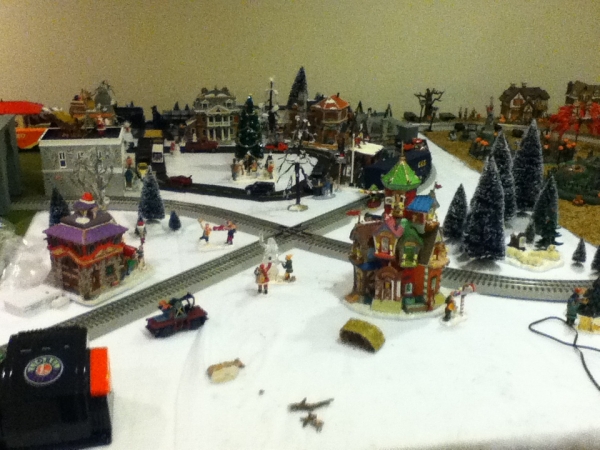 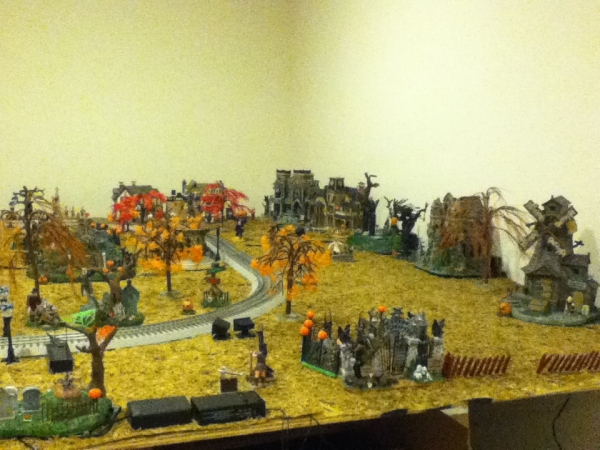 Finally, here’s a video of the trains in action. Many of the buildings and figures light up and emit noise but I didn’t bother plugging it all in.

Check back for next week’s Trainman1405 In Real Life post – it’s a pretty special thing!

Oh, and before I forget – looks like Club Penguin set up a Trainman monument in Kelowna near their office. (just joking, but that is a real train yard in Kelowna. Beautiful area!) 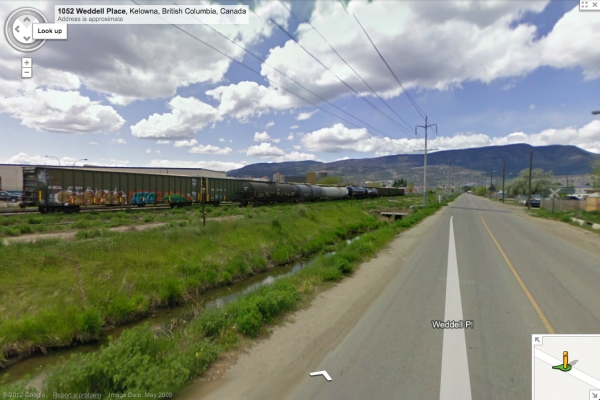