First of all, some of you may have heard about Polo Field getting a Twitter account. This is true. He’s actually had it for over two years! He just rarely tweeted. I’ve known about it ever since he first created it (and knew it was real) however it was kind of a secret, so I never shared about it. Only a friend and I followed him. This was before many penguins knew who Polo Field actually is. His Twitter account is private, but you can send him a request. He will accept it when on the computer (he often tweets via his iPhone) and also follows back. His username is @polofield. I do have the Twitter usernames of other Club Penguin employees, however those are their real life accounts and I don’t think they’d want to be bombarded with penguin questions.

Anyway, as you may know, you can only add mascots, Happy77, and Billybob on Club Penguin if you meet them. This may soon be the case with Polo Field, too, judging by what he said on Twitter! I wonder if the glitch to still send Happy77 and Billybob a request without actually meeting them in game will apply to Polo Field, too? 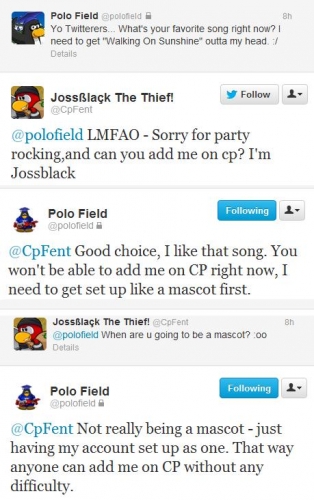 Since we love Club Penguin’s history here at Club Penguin Memories, here is the first time I met him in game. This was in Fall 2008 when Vital Viper turned 1,000 days old. For some reason Vital Viper was really famous around the game. He still goes on from time to time. At this party Polo Field and Screenhog showed up, and Polo Field added me. Only a handful of people knew he worked for Club Penguin at this time. 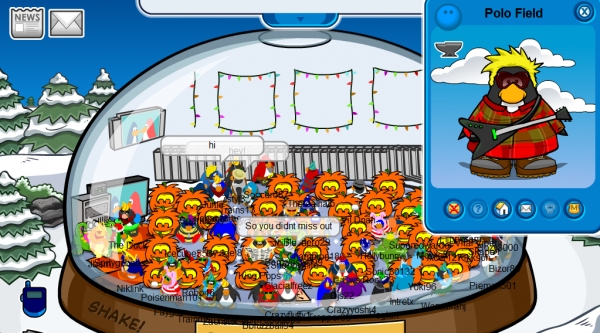 A second thing of news – some of you may have first discovered Club Penguin through Miniclip, a popular online gaming website. Club Penguin has been a featured game to play on Miniclip ever since March 2006, which helped greatly heighten Club Penguin’s popularity. Miniclip was how one of my friends (Dale Jr Is 1 on Club Penguin, although he quit many years ago) discovered Club Penguin, which is who I discovered Club Penguin from. Miniclip has a forum (message board) for all their games, and they had a special section to discuss Club Penguin. A year later, in March 2007, that forum was removed and the penguins got their own special forum, known as Penguinforum. (MCCP for short, which stands for Miniclip Club Penguin) To join the forums you had to be 13 or older – a rule many broke, but if found out, you’d get banned from the forum forever or until you turned 13. (your penguin account is unharmed)

Back then a lot of Club Penguin players were teenagers, as teens frequented Miniclip and Club Penguin and played the game. However, as they grew up and quit and Club Penguin was marketed towards younger users under 13, Penguinforum stated to die and grow inactive – it’s been that way for over two years now, only getting several posts a day. It was originally a few hundred posts a day minimum.

I myself joined that forum on June 2, 2007. I was 11 at the time but turned 12 a few weeks later, and confessed I was under 13 in the beginning of July when my real life friend got banned forever for being found out as under-aged. I was let back in 2008 when 13, posted for a while, then due to a sketchy history (a friend of mine got a forum moderator’s password and I logged onto it and read the staff forum) I got banned forever from that forum for admitting to what I had done. However, after a great debate a year later, I was let back on. By this time the forums were slowly dying and becoming more inactive.

Then today they closed. This is sort of sad for me, as it’s how I met a lot of friends 2007 – 2012. Some I still chat with, others I’ve lost communication. It was a great place to hang out and discuss Club Penguin and general things with others with your interests. But due to inactivity the special Club Penguin Forum has had its plug pulled.

This was there I knew about Polo Field, as some Club Penguin staff members (official ones) went from the forums from time to time. Polo Field was one of them and gave a link to his Twitter account a while back. Because MCCP was a bit inactive at this time that’s why not many knew about it. 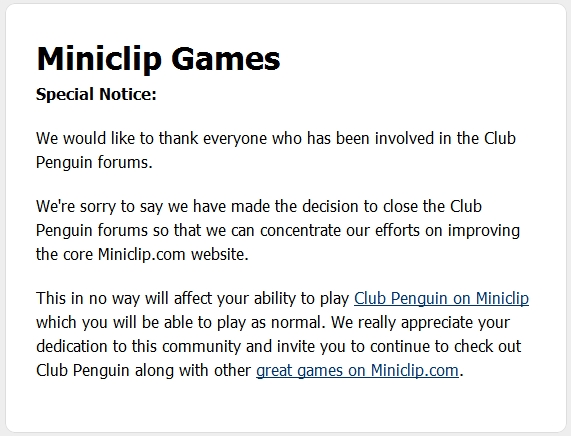 Penguinforum was also where I got to interview Hamustar, a Club Penguin employee, for Club Penguin Memories. You can check out this interview on my website here. That was one of the coolest things I’ve done to date, due to the fact nobody has ever done that before.

The mentioning of my interview brings us to my next to last piece of news. Polo Field recently asked what you would ask the Club Penguin Team if you could interview them.

If you could interview the Club Penguin Team, what would you ask them? ^Polo Field http://t.co/ux875wmv

When on Club Penguin earlier today Polo Field said there will be a video interview with Billybob, with Polo Field being the one interviewing him. (as I’ve been told by a friend who was there) Polo Field was also asked about server jumping and he said something along the lines of “keep your eye out next month.”

Finally, I’ve recently been asked by a few Twitter users if a certain Twitter account claiming to be Happy77 was real. I knew it wasn’t, just because They Capitalised The First Letter Of Every Word Like This And Happy77 Does Not Do That, and if it was I think she would have promoted it on one of the team’s three official Twitter accounts. It’s also even been said by Club Penguin that it is indeed fake.

That’s all for now! There’s your daily dosage of history and news. I didn’t actually mean to make it this long (1,000 words) but if you read it all, props to you!

20 thoughts on “Small Club Penguin Bits of News and History”