Here is an interesting article about Lane Merrifield (Billybob) from Kelowna Capital News. (It’s also a reminder to stay in school! Hehe.) To summarise it, Lane Merrifield was awarded his Honorary Fellow Distinction at Okanagan College today. This is where he did his studies. It’s just a little something I thought I’d share…lookin’ good, Lane! ;-) 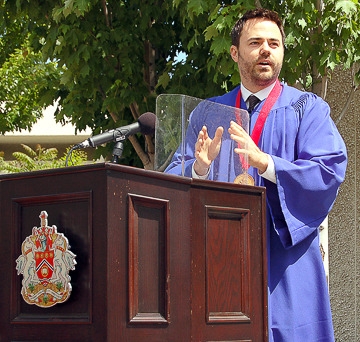 During Saturday’s convocation ceremony, the former C-average student told Okanagan College graduates he never would have imagined that he would be asked to give inspiring words to those who likely earned higher grades than he did.

“I spent many of my younger years just trying to get through,” said Merrifield.

“I didn’t fit in very well with the traditional system. Back when I was in school, inventing new ways of doing things was called ‘cutting corners’; creating characters and stories was called ‘daydreaming’.”

Although Merrifield was a less-than-ideal pupil, the success he endured after education is what led Okanagan College to name him the 2012 Honorary Fellow: An award that is given to those who have made significant contributions to the college, the Okanagan valley, the province or the nation.

Merrifield co-founded Club Penguin in 2005 out of a desire to provide a safe online space for children around the world to connect. The company grew significantly and was acquired by Disney in 2007 for $350 million.

“I found my joy. I found my muse, my element. I was lucky enough to discover exactly what I feel like I was created to do—then I did it with all my heart. That’s what I believe has enabled me to find success.”

The Club Penguin co-founder urged graduates to steer away from chasing the dollars until they have found what they are passionate about.

“Before you dash into that new career or next level of education, please make sure you’ve found your element,” Merrifield told graduates.

“You’ll know when you’ve found it, because not only will you become incredibly successful at it, more importantly you will love doing it. Work won’t feel like work.”