The 5th issue of Club Penguin’s Magazine is now out in stores in the United Kingdom! This is for June 2012. 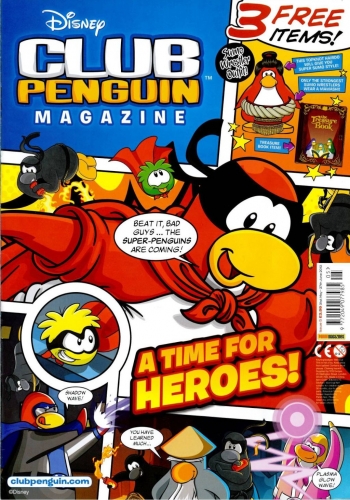 As always, thanks to Bloxxerman I have a list of the table of contents in this issue for reference:

From the Marvel page in the issue:

Hold on to your hats! From June 14 on Club Penguin, you can expect to encounter some strange, surprising and super powered goings-on! Here’s the lowdown on one party you don’t wanna miss.

Some of the super heroes you can dress up are: Black Widow, Hawkeye, The Hulk, Thor and Captain America. When you log in, you’ll have to decide if you are going to be a citizen, a Super Hero (member only) or a Super Villain (member only). As a Villain, you might get the chance to rob the bank. Of course, if you’re a hero, you’ll have to stop them! You can dress up as Loki too, and there will be other Super Villains to choose from.

In the skies above CP, this floating HQ is where the good guys meet up to figure out how to save the world!

A mysterious glowing Meteor has crash landed on to the Dock on Club Penguin!

There’s a fire at City Hall. The brave citizens are trying to put it out, but more help is surely needed…

The Destructobot is the greatest tin-can terror of them all! Super Villains get to pilot this giant robot, whilst the Super Heroes have to work together to deactivare it!

This is where the bad guys and gals plan all their evil deeds. You will have to decide which team you belong to!

Finally, thanks to my friend Pengumile, I have a picture of the Saxophone, next month’s free item. 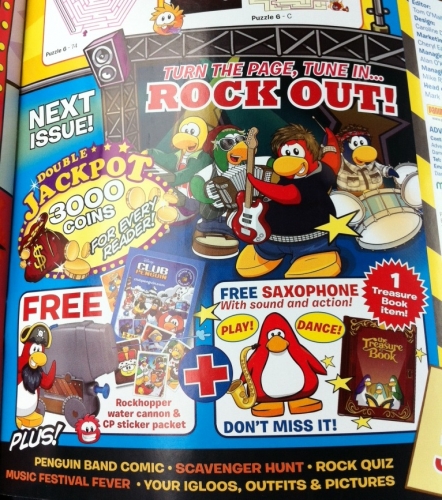