Update: They changed the name back to what it was. I wonder why?

Club Penguin has once again made a change to their item database file. It’s nothing major – no new items, just an item rename – by one later. It was formerly known as the Gray Fedora, but now it’s the Grey Fedora. The item is from the Ruby and the Ruby stage play, worn as part of the Jacques Hammer outfit. This item: 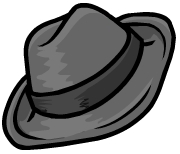 Now, Club Penguin only changes item names (if needed) shortly before they return. If you recall, on the 1st of March I posted about how they changed a few prices for Quest For the Golden Puffle Items. What play is currently showing? Quest For the Golden Puffle. Now, this Grey Fedora could easily be in next month’s clothing catalogue, but I think it is more likely Ruby and the Ruby will be returning. What do you think? Also, for those of you who are confused – gray and grey are both spelled properly. Gray is the American way of spelling it, Grey is the English (British) way of spelling it. Other common spelling differences between America and the UK are Color/Colour, Catalog/Catalogue, and other stuff such as Airplane/Aeroplane. And that concludes today’s English lession. Chao!

10 thoughts on “Ruby And The Ruby To Return To Stage Next Month?”