If you’ve been to other Club Penguin Blogs, you may or may not have seen some Shadow Ninjas theories saying that they think the middle of the Amulet will be for the fabled yet true Card-Jitsu Shadow. We don’t know if it’s just items or a whole new game, however I have an idea. I think that in November this year, just like the past three Novembers, we will get a new Card-Jitsu game, Card-Jitsu Snow/Ice. However, I thought beyond that. 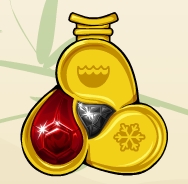 What if the middle gem is indeed for Card-Jitsu Shadow, but in order to be a shadow ninja you need to fully complete Card-Jitsu so you can access the Ninjas Hideout, and be a Fire Ninja, Water Ninja, and Snow Ninja? Then once you are the ultimate ninja you can become a secret shadow ninja? Then to get to the Shadow Dojo and train, you would go to the Ninja Hideout, stand in the center, and would be teleported.

What do you think? Will we be seeing one ninja class this November or two? Leave a comment with your thoughts.