Several months ago (back in March) I posted some evidence that Club Penguin is working on some mobile items for Club Penguin. The jobs have since been removed, however I found some more proof to back this up. It comes hand in hand with the Card-Jitsu Snow Collector Tin I posted about. Take a look at the bottom of this image, even though it’s hard to read: 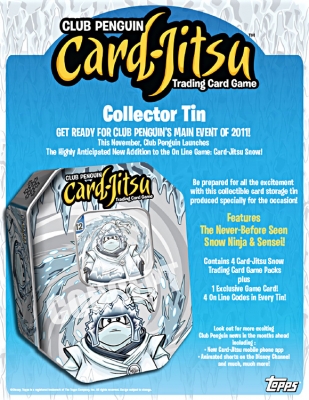 At the bottom it says the following:

Look out for more exciting Club Penguin news in the months ahead including:

A Card-Jitsu mobile phone app! Do you think it will be for Android and iOS? That was the main focus of the job positions. It would be quite cool, however I wonder how it would work. Maybe it’ll be through Game Center, kind of like how Doodle Jump matches you up with a random person over wifi/3G. I can’t wait!

Not only that, but the animated shorts (Kind of like Shaun the Sheep) seem interesting.

4 thoughts on “Club Penguin To Have Mobile Card-Jitsu App and Disney Channel Shorts!”