After doing a little bit of snooping in Club Penguin’s files, I have once again managed to get some exclusives about the upcoming party. Last time I found out what the member/party only rooms were going to be for the Music Jam. This time I’ve found other stuff. First of all, in Happy77’s Adventure Party Sneak Peek video, you’ll see the pirate poster. This SWF for it has already been updated from a past party to the Adventure Party ahead of time. It’s the same exact poster as last year. In addition to Happy77’s video confirming he special pirate room, so does the swf. 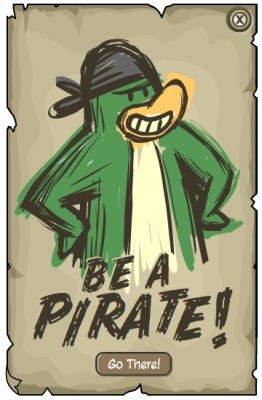 If you don’t believe me, here’s the snippit from the file containing it:

This next part is a little hazy. In one of their files for special item dances, there are a few item IDs listed for items that do not exist. On of them, the item id 4391 is listed that it goes along with the Telescope in this month’s catalog. However, item ID 4391 does not exist at this time.

Neither do the ones in the image below, even though it’s hard to see.