It’s a day away – Club Penguin’s Party for the month of June. What party? The Music Jam. During the Music Jam stages are added all over the island each with a different theme/genre of music. The Forest has a country theme, the Beach has a girl pop theme, and the Lighthouse has a punk rock theme.

Because the party is so close I thought I would post the final rumors and roundups and examine everything penguins are claiming about the party. This is similar to my theories post however after Happy77 posted her video we know a little bit more, or we can at least assume some stuff.

The first rumor is the T-Shirt Booth will return to the party. This is most likely true as it’s been at all the Music Jam Parties. Not only that, but you will need a backstage pass to meet the Penguin Band. It’ll probably be at the Snow Forts like usual. There has also been some penguins wearing items that are not yet released such as in the newspaper and the new login screen design. Chances are we’ll see these at the T-Shirt Booth. 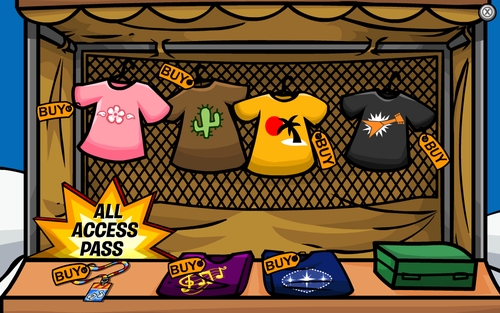 One thing that has been confirmed is the Dance Club Roof (Night Club Rooftop) will be returning for this Music Jam Party. It has been there in the past and it even said it’ll be there on Club Penguin’s Website. Cadence will most likely show up, giving penguins the change to meet her (and her Puffle Lolz) so they can earn her stamp and background if they have not yet already. 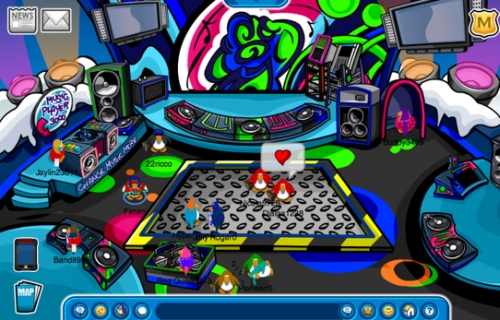 Speaking of rooms around Club Penguin, most of them will have the same decorations. While not confirmed, there is much suspicion on this. I compared this year’s boxes around the island for the construction and they are the exact same. Most of the rooms will be the same as they have been in the past. There will be some minor changes to them, though. Take the Iceberg for example. This is what it has looked like in the last year: (last year Club Penguin added the wood around the Iceberg) 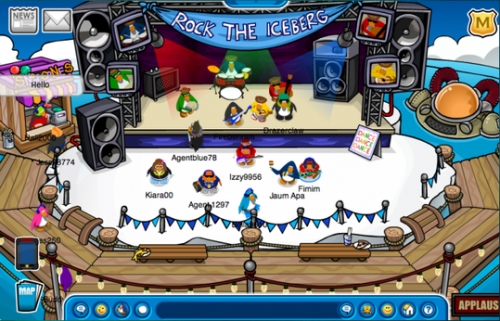 This is what it looked like in Happy77’s video titled Club Penguin Music Jam 2011: Coffee Break Beats. If you compare it,, it looks a little different, doesn’t it? I’m not 100% sure that’s the Iceberg, but it sure looks like it. Maybe they have their own special platform that floats around? If it’s not the Iceberg, what room is it? You can also see their new outfits.

We’ll also most likely have the chance to go Backstage, which has been accessible in the past from the Dock or Casa Fiesta. I have a feeling it’ll have a bit of a new look to go along with their new look. I’m not talking about the poster of them on the wall…but how cool would a redesigned Backstage be to go along with their updated look? Update: I have confirmed that it will be at the party. 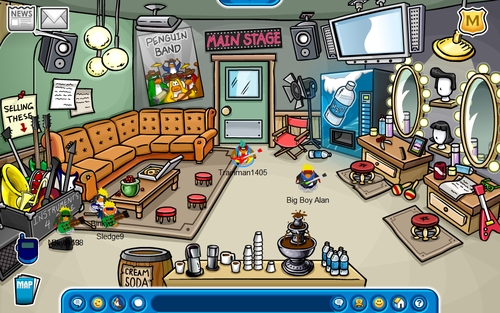 If the Backstage makes an appearance again this year then we’ll evidently have the Music Catalog. Even if there is no Backstage this year (although I don’t see why there wouldn’t be) we’ll have a Music Catalog. We’ve had it at all the Music Jams – 2008, 2009, and 2010. It wouldn’t make sense to suddenly remove it from the party one year. There will be both new and returned items in the catalog (my guess) because it’s like that every year. There is always one or two hidden items in the Music Catalog. If you would like to see the past Music Jam Catalogs then click here. What new items do you think the catalog will contain? I think there will be more guitars and maybe something such as a new pair of Maracas? Maybe that’ll be the free item at the party – who knows. I think the Blue Bass Guitar and Trumpet will be in the catalog, as Billybob and Happy77 had these items on in the recently uploaded Youtube video. 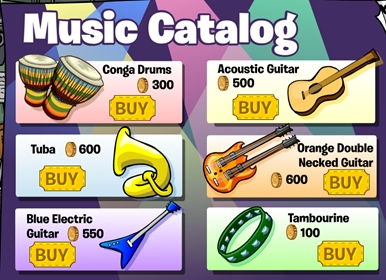 Some penguins claim the Music Maker 3000 will return to the party. Although we have no official way of knowing, chances are it will indeed be at the party. It’s been there at all the past Music Jam Parties, including last year. Like many other things, we will just have to wait and see. You can also see the Applause Button in the image below – that will most likely be at the party, too. I also coded my own using Club Penguin’s image for it and added it to my website! If you see any other websites (such as Pochoma123 or Riffy8888) with it, they got it from me. In fact, you can get the code yourself. I posted it on a blog of mine. You can find the code here. If you have any questions about it, feel free to contact me. Anyway, here is the Music Maker 3000 room: Update: I have confirmed that it will be at the party. 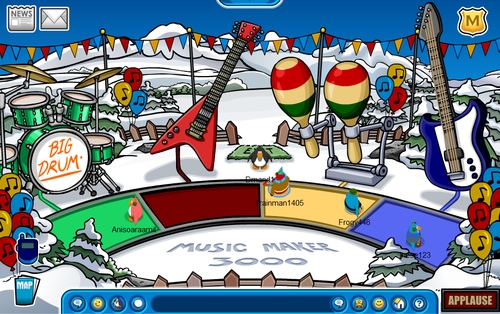 There is one other sneak peek in Happy77’s video that I want to elaborate on. The Town. while Happy77 did not show much of the room, here she is in the Town: 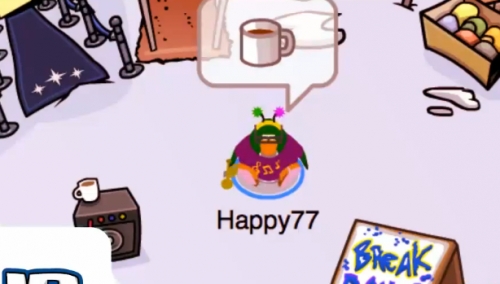 You can see the entrance to the Coffee Shop has the blue carpet, there is the speaker with the coffee mug on it, and there is a sign that says Break Dance. Because of this I have a strong gut feeling the Town will look about the same as it did last year. Here is what it looked like: 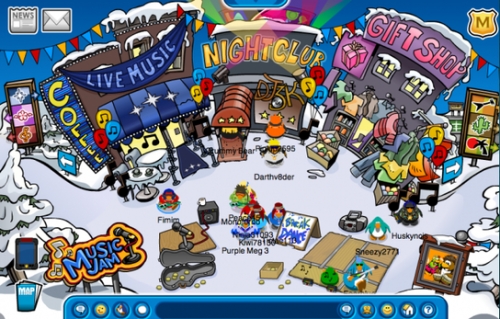 The Casa Fiesta was added to the Music Jam Party last year. Chances are it’ll return this year. While I have no actual proof, like many other things I can guess based on my hunches. There was some items in new furniture catalog for June that contained items from this room. Not only that, but on Club Penguin’s Fun Activities page they moved the Casa Fiesta activity to the top of their list for the section is belongs on. Here is what it looked like. Update: I have confirmed that it will be at the party. 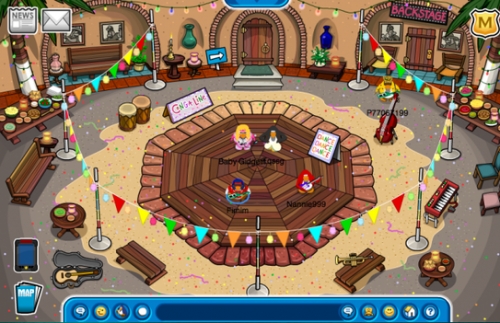 The final rumor I wanted to discuss in the Penguin Band. It’s no secret by now that Franky, G Billy, Stompin’ Bob, and Petey K got a makeover and will have their own style of music. The newspaper showed all of us what they look like in their new outfits. Not only that, but you can see them in Happy77’s video which I showed above. From what I’ve heard around the Club Penguin Community on blogs and social media websites such as Twitter, it seems like penguins are not happy with these new outfits. It’s a little ironic – many penguins complain that Club Penguin keeps bringing back the same parties, recolors clothes, etc. They give the Penguin Band a whole new look, and they complain about it. You see the irony in that? Also, think about the penguins that joined Club Penguin in the past year – a wide majority has not seen the old Penguin Band look, so they don’t care that much! Anyway, if you have not yet seen the Penguin Band in their new outfits, here is what the group looks like:

In closing, chances are the Music Jam 2011 will have more old decorations than new – but that’s not entirely a bad thing. Many penguins have not been to these parties, so they don’t care. Club Penguin DOES listen to feedback, and I bet they try their best. You can’t expect the game to be 100% bug free and get everything you want. They do try their hardest, and I’m sure the party will not fail to please us penguins tomorrow when it’s released. Be sure to check back once the party is out for all the cheats, free items, and rundown of the party once released! Not only that, but I’ll be doing my best to track both the Penguin Band and Cadence while they are waddling around. Be wary of other websites that are giving fake locations or rely on users to submit their location – I’m not saying everyone does it, but chances are it will be abused. Don’t waste your times with that stuff! Anyway, I’m rambling. Have fun jamming!