Be sure to vote below!

Hi everyone, I thought of an idea a while ago called “On This Day In Club Penguin History”, and I’d either make a post talking about some event that happened on this day on Club Penguin between 2005 and now. There is three ways I can do this:

Vote in the poll and it’ll help me decide which I should do.

On March 5, 2010 Rockhopper arrived on Club Penguin for the first time in 2010. This is his catalog: 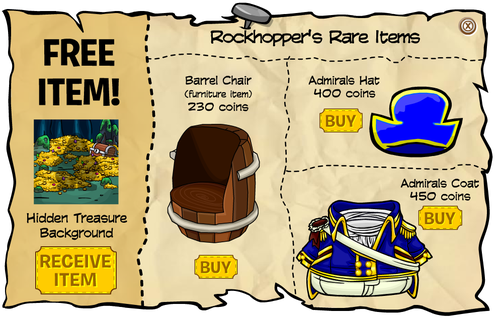 As you can see, his free item was the Hidden Treasure Background. The new items were the Barrel Chair (230 coins) and the Admirals Coat (450 coins). The Admiral’s Hat (400 coins) was returned from December 2006.

On this day in 2010 the March 2010 Penguin Style Clothing Catalog was released.

Another thing I’ll probably be doing sometime in the next month or two is guides to help newer Club Penguin Players, such as how to be a ninja, the basics to Club Penguin, etc.

5 thoughts on “Possible New Idea – “On This Day In Club Penguin History”?”