On the 29th of December Club Penguin has updated in 2008 and 2011. The biggest update in 2008 was the 10th PSA mission, Waddle Squad, being released. There was also fireworks for the new year and some snow from the Christmas Party was moved to the Lodge Attic for storing.

The 10th PSA mission is Waddle Squad. In this mission Gary says a golden puffle has been found (this was before they were released in-game) and that you need to keep it safe. In the mission you work with Jet Pack Guy and Rookie. Rookie ends up revealing information about the golden puffle’s whereabouts to Herbert, who then tries to steal it. Herbert’s plan to steal the puffle fails and the mission ends with with Herbert taking Rookie’s spy phone and teleporting away, thus escaping. 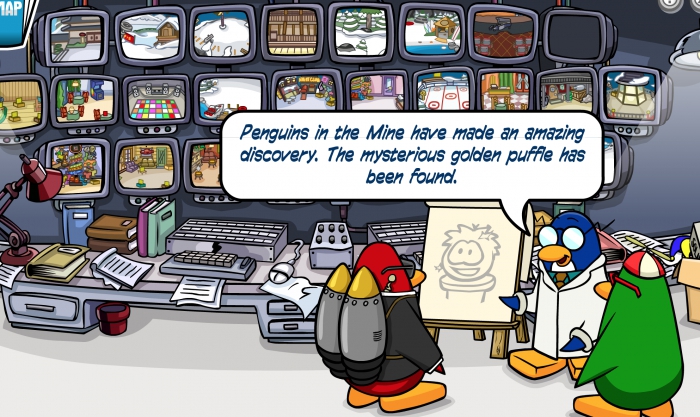 Aside from the new mission there were two other updates in 2008. To celebrate the new year, fireworks were temporarily added to the Mountain and Iceberg. The other update was Christmas Party ending. Club Penguin took some of the extra snow from the party and placed it in the Ski Lodge attic for storing, keeping it cool with Gary’s AC3000 invention. The snow was being stored for February fun, according to a sign placed in the lodge. The fun was the Snow Sculpture Showcase.

In 2011 there was also fireworks for the new year, plus a new pin and a new field op mission. Again fireworks were at the Mountain and Iceberg. The new pin was the Candy Swirl and it could be found at the Coffee Shop. This pin is Club Penguin’s 192nd pin overall, the ninth pin to be hidden at the Coffee Shop, and the final pin of 2011. As for the field op, it was the 62nd one and you had to go to the Mountain for it. You could complete it by destroying the targets in the mini-game, which was done by entering the x and y coordinates to fire the defense cannons on the red targets.