This week’s Penguin of the Week was nominated multiple times! Congratulations to Pup1one! 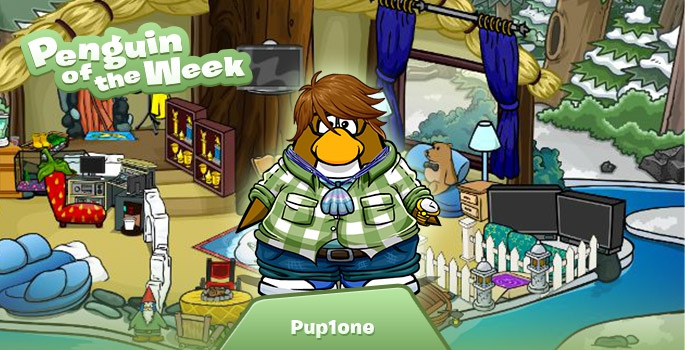 Pup1one was nominated to be Penguin of the Week by Rayane138, Chemistry, Bwsamfay, Penguinncp, and Bacon! Here’s all the nominations:

“Hey Megg I nominate Pup1one because is my best friends and coolest penguin. HIS IGLOO IS COOL. He is coolest penguin and is your friend. Waddle On!”

“I would like to nominate Pup1one because he is a really fun and supportive friend to everybody he meets and he is super talented! He also is a very stylish penguin! Waddle on!!!”

“I would say Pup1one for being a nice member of Club Penguin and hosting events! :D”

“Wow! Look at those names :O For next POTW i would like to nominate Pup1one because he does a lot amazing stuff and good jokes!”

“I would like to nominate my friend Pup1one for POTW! He sets up amazing events and is a well known person in the community! He has surprisingly not gotten it yet, definitely deserves it!”

Congrats! Pup1one received 10,000 coins and the Penguin of the Week background as a reward.

Want to nominate someone for POTW? Comment on the Club Penguin Blog with their penguin username and why they should be chosen. Who knows, the Club Penguin Team may end up picking the player you nominated!