On the 8th of December Club Penguin has updated in 2006 and 2011. In 2006 Rockhopper visited the island and introduced us to red puffles. A new pin was hidden and the igloo music was updated, too. In 2011 a lot of updates were released, including preparation for the Holiday Party and Coins For Change, the Ice Rink returning, a new field op mission, and more.

On this day in 2006 Rockhopper made his second visit ever to the Club Penguin Island. This visit he brought red puffles with him, which all players could now adopt! As of this update in 2006 you could only blue, pink, green, black, purple, and red puffles were discovered. 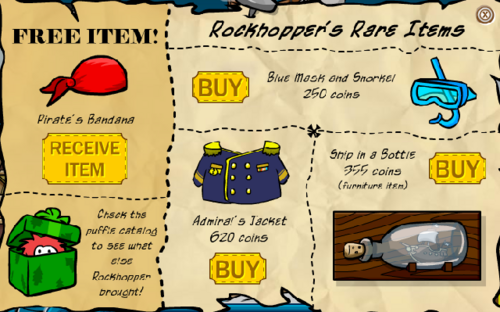 In addition to Rockhopper’s visit a new pin was hidden and there was some new holiday igloo music. The new pin was the Bonfire Pin and you could find it in the Ski Lodge, now known as the Puffle Lodge. This is Club Penguin’s 20th pin overall and is the first pin to be hidden in that room.

In 2011 there were many updates. For starters, Coins For Change 2011 and Holiday Party 2011 boxes were added around the island to prepare for the month’s big events. Rockhopper, who was coming to Club Penguin for the event, was closer in the telescope. Login screens advertising this upcoming event were added, too.

Club Penguin also had a couple sport related updates. The Ice Rink replaced the Soccer Stadium like every year around this time and the sports catalogue was updated to contain hockey and ice skating items. Speaking of catalogues, Club Penguin added Card-Jitsu mats to the furniture and ninja catalogues on this day in 2011, too. Before Card-Jitsu: The Ninja Quest book was now unlockable also. Along with these two ninja related updates a new ninja progress board for Card-Jitsu was added but then later removed due to reasons not known.

There were two other updates in 2011. The first one was a new field op mission, the 59th one. For this one you had to go to the Lighthouse and complete the mini-game, which was to guide the microchip and recharge the batteries. The other update was on the Disney Parent Portal app, which could be found on Facebook. The ability to send the gift of coins via a postcard was added. The Disney Parent Portal no longer exists.