After so much anticipation, the time has come! Club Penguin’s 10th Anniversary Party is now here, and every day until October 21st you can collect a free item. There’s also the 10th Anniversary Hat to pick up, many rooms to see from the past, a new yearbook, a new song by Cadence and the Penguin Band, and finally many mascots to meet! 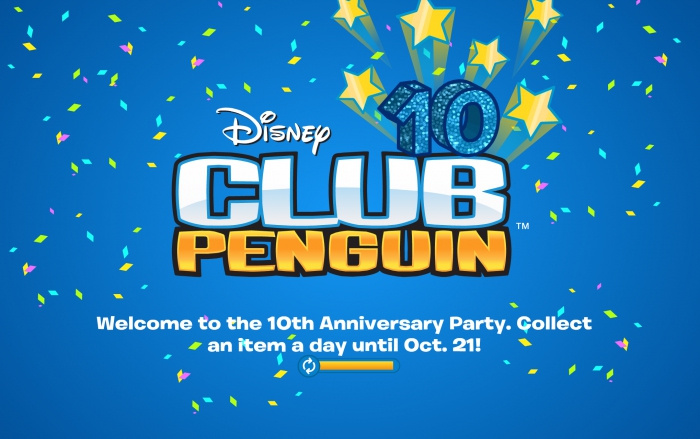 When you first sign on you’ll be greeted by most of Club Penguin’s mascots wishing you a happy ten year anniversary. 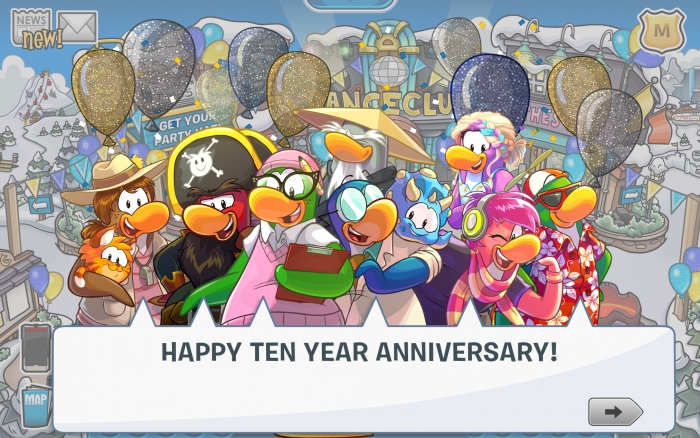 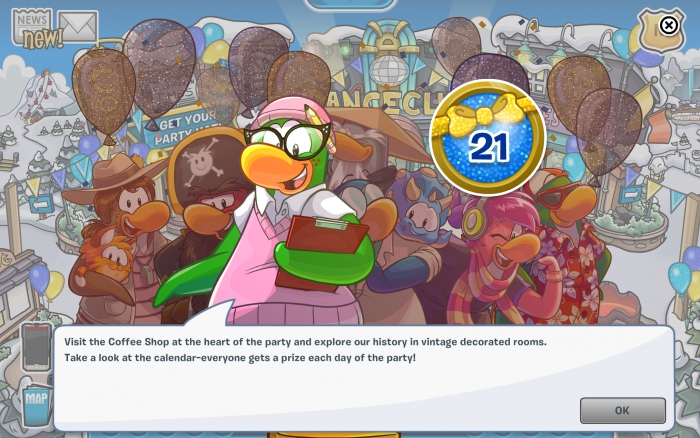 AUNT ARCTIC: Visit the Coffee Shop at the heart of the party and explore our history in vintage decorated rooms. Take a look at the calendar – everyone gets a prize each day of the party! 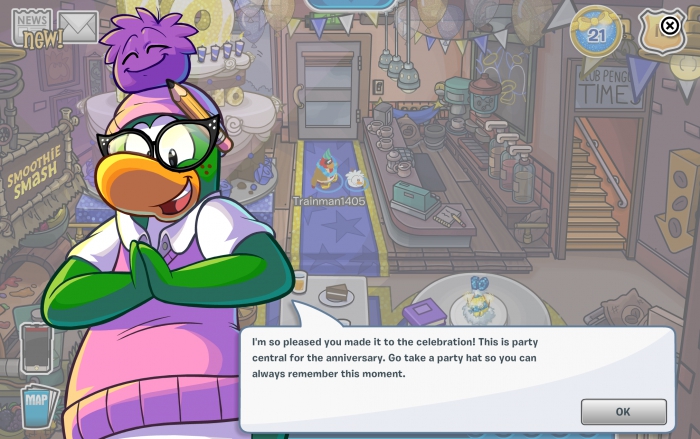 AUNT ARCTIC: I’m so pleased you made it to the celebration! This is party central for the anniversary. Go take a party hat so you can always remember this moment.

On the table is the party hat, which you can click on to collect. There is also a special new yearbook on the table. Also, hover your mouse on the cake’s candles to unlock a rare stamp! 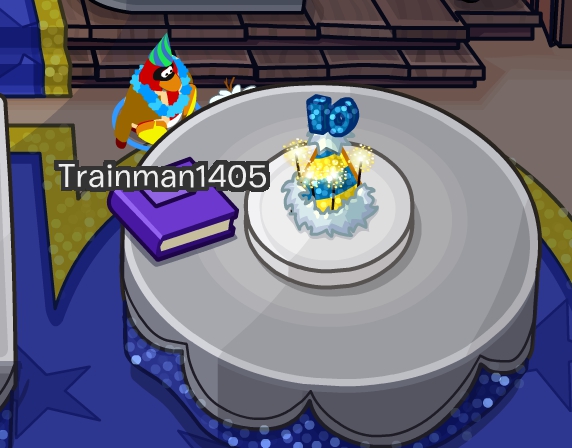 The new yearbook is the 10 Year Anniversary Edition. 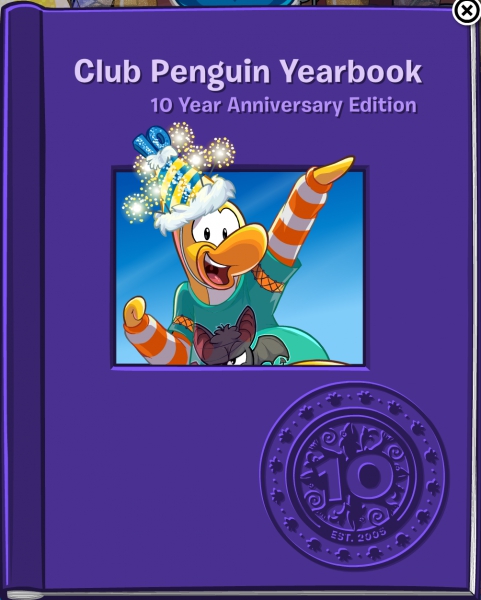 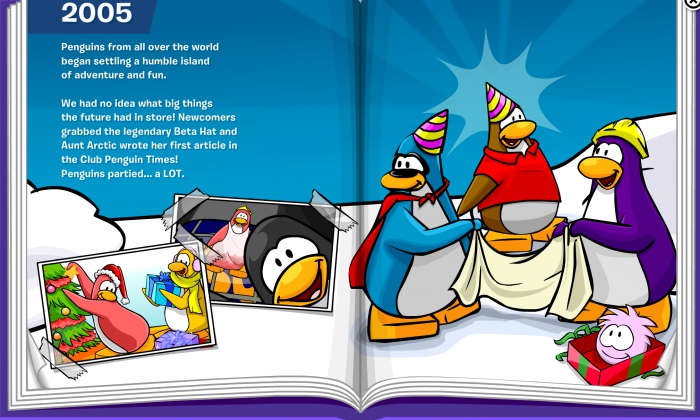 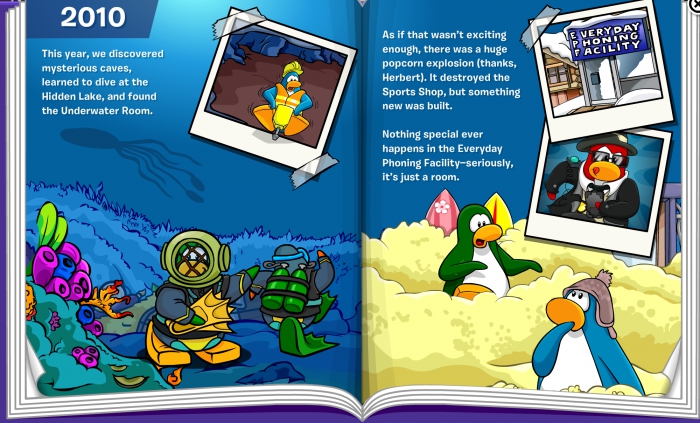 On mobile devices only a handful of rooms are decorated, so it’s recommended you check out the party on the computer if you haven’t. Here’s some highlights you don’t want to miss out on at the party!

A new item is available each day. Here’s what’s to come… 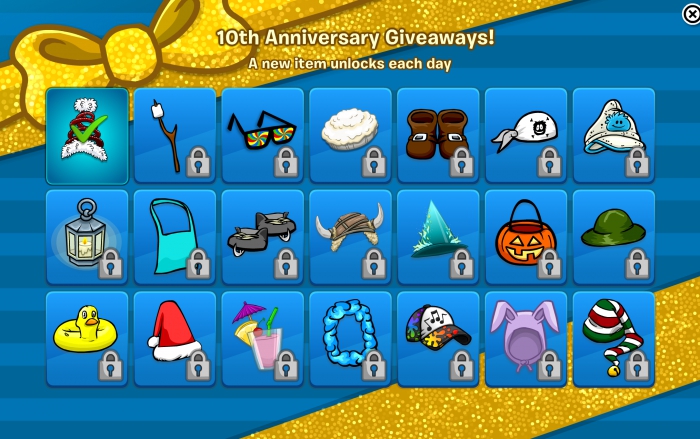 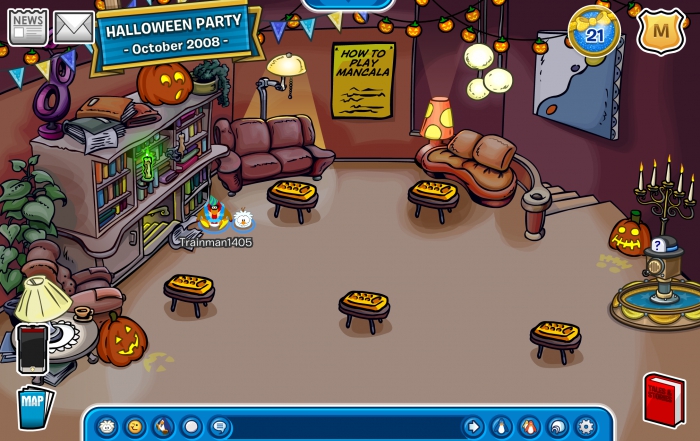 You can use the lever on the wall to turn on the Monster Maker 3000. 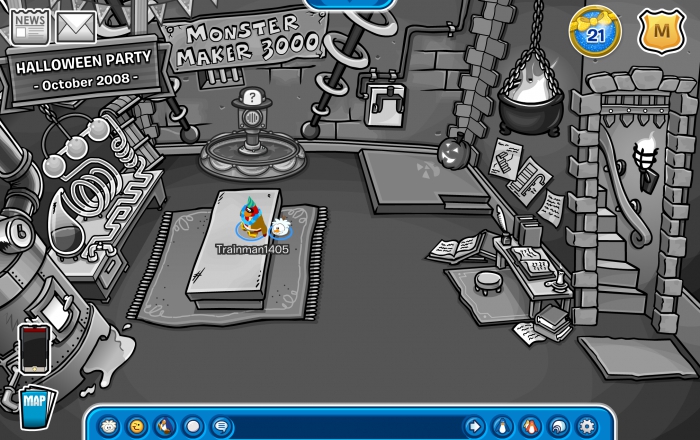 At the Town you can adopt Dino Puffles if you’re a member. On the mobile app players can get the Gold Puffle. 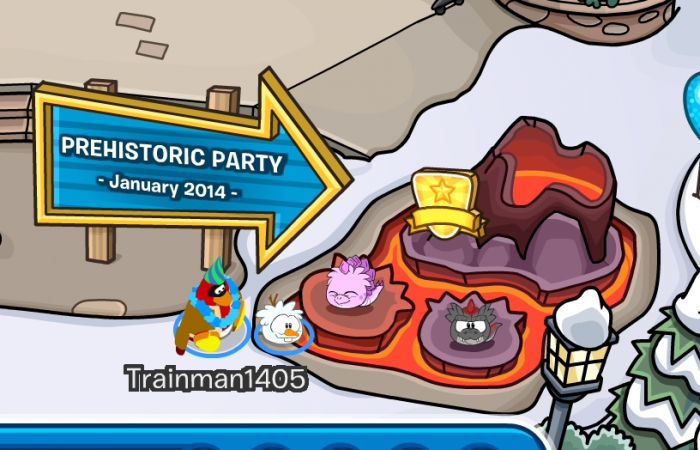 A fun room is the Iceberg from the 2008 April Fool’s Day Party. A lot of rooms will either have a penguin mascot robot speak or a tour guide recording. 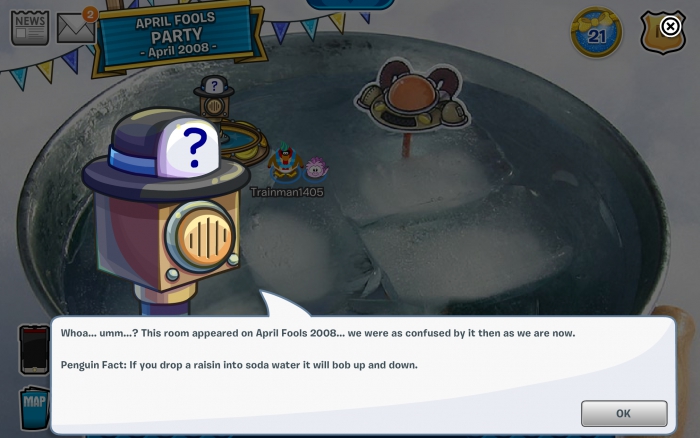 At the Forest you can waddle up the ladder to access the tree forts. 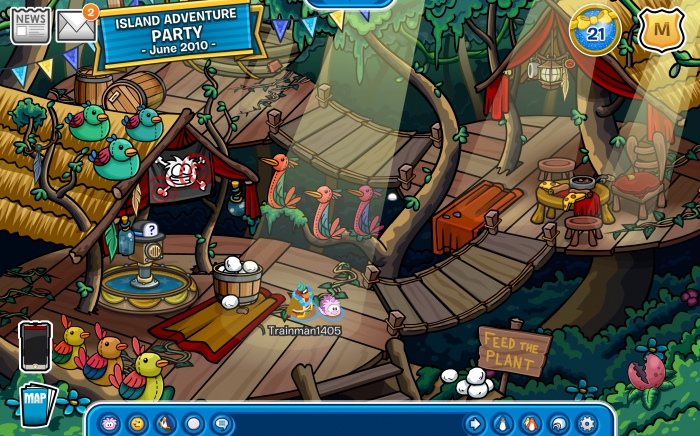 At the Snow Forts you can access the Puffle Feeding Area. 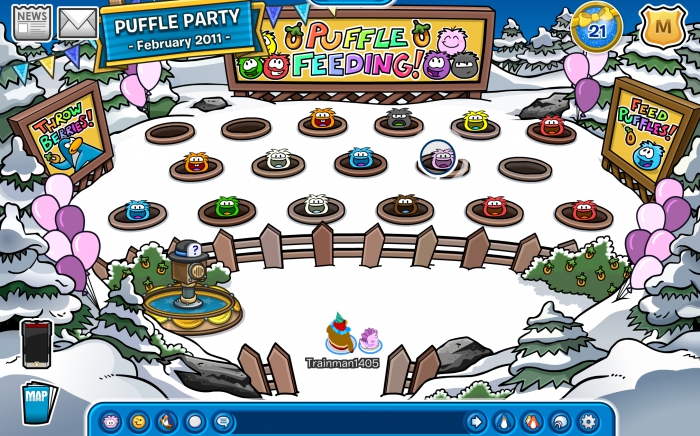 Here’s an oldie: the Stadium is the Ice Rink from the 2005 Christmas Party! 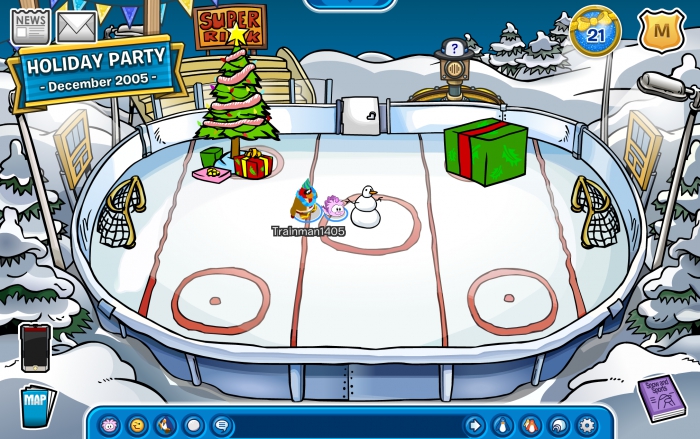 The Dock is Camp Penguin from August 2007: 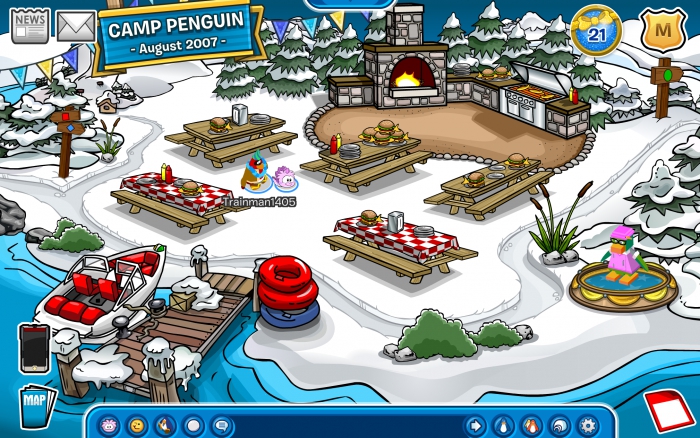 Another fun one: The Lighthouse Beacon from June 2007’s Summer Party! 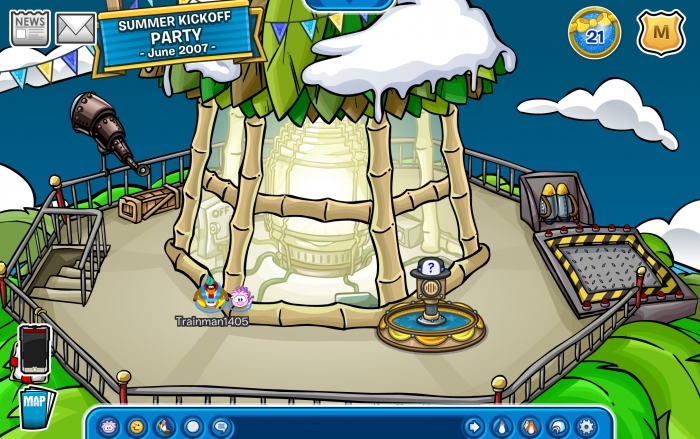 You can access the Casa Fiesta from the Ski Village: 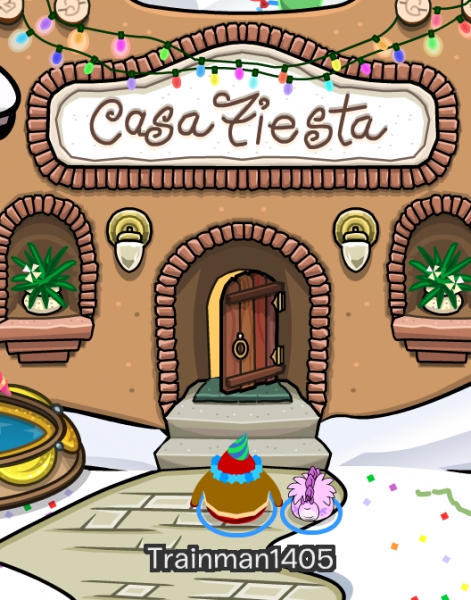 You can access Santa’s Sleigh from the Dance Lounge: 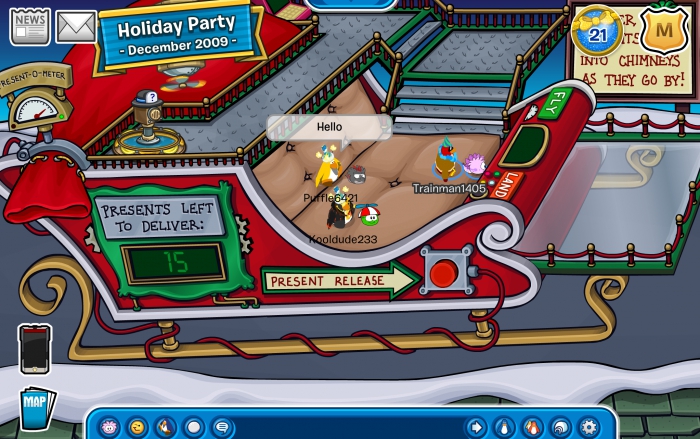 …and so much more! Waddle around the island yourself to see all the misc room designs from 2005-2015. You can also look at my parties page, which has pictures of every decorated room at every party Club Penguin has held.

There are three special emotes to celebrate:

Finally, if you want to meet mascots at the party, check out my other post for a large list of meetup times.

This party is great! I love it! What about you guys, how do you like it? Any rooms you wish Club Penguin included instead?