The new pin released on this day in 2009 was the Sand Castle Pin. You could find it at the Mine. This was Club Penguin’s 96th pin overall pin and the third pin to be hidden in that room.

The other update in 2009 was the beginning of that month’s party, the Festival of Flight. The Festival of Flight was a project led by Gary the Gadget Guy. The windows in the underground pool room needed to be replaced. If they were to replace them then the underground would be flooded. To avoid flooding, Gary made the entire island float in the sky. At the Festival of Flight you could ride a hot air balloon to the Tallest Mountain, a room where members could pick up the free Jet Pack item. All players could pick up the Green Propeller Cap at the Plaza. Gary was waddling around the airborne island, so if you met him you could get his free giveaway background.

The only update in 2014 was a new furniture & igloo catalogue. It contained items relating to the movie Frozen. 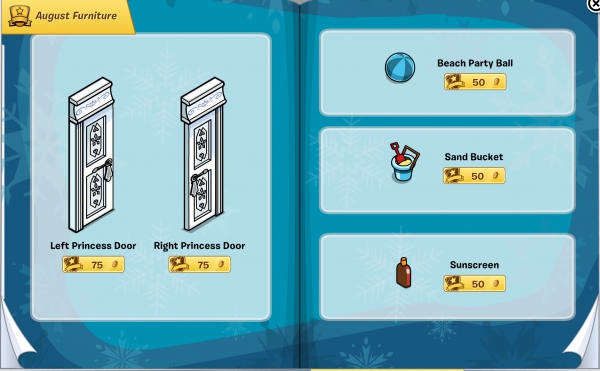