On the 13th of August there’s only been updates in 2010. There was the beginning of the Mountain Expedition Party and a new pin.

For the Mountain Expedition you had to go to the Ski Village since it took place outside of the island’s main rooms. From there you could go to the supply camp room. There was a catalogue in this room where members could purchase the following items: 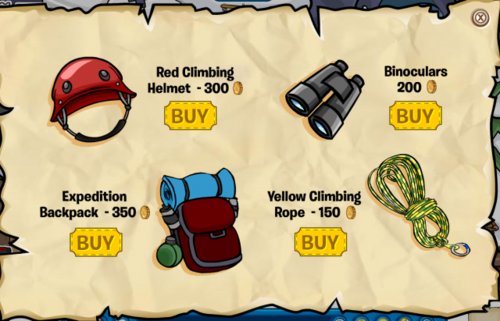 There was also a free Chilly Trek Hat in a box in the room that all players could obtain.

At the Supply Camp there was an entrance to a cave. When you waddled through that it would take you to the Frozen Ice Cavern room. The exit on the other side of the room was blocked by icicles so you had to throw snowballs at them to clear the path. After that you would end up at the Base Camp to take a rest and contiue up the mountain. This time you had to use an axe to chop a tree down and place it over a gap in the path to continue up the mountain. After that you would be at the tippy top. Members could get the free Red Flag hand item and the Top of the Mountain background. You could unlock the Party Puzzle and Happy Room stamps at this party. Here’s a video made by Cena12121 showing the full expedition: