Updates on the 7th of June have only happened in a single year so far: 2012. In 2012 there were six different updates: a new field op, new furniture and igloo catalogues, a meteor crashed at the Dock, the soccer stadium returned, and along with that the sports catalogue received an update too.

For those of you unfamiliar with field ops, EPF agents used to have weekly mission assignments from Gary. We would have to find the location Gary was referring to in his orders and then play a mini game. If completed successfully we would get a EPF medal which could be used to buy secret agent clothing items. Eventually field ops were phased out due to being repetitive. You can currently play all of the mini games and from field ops and earn medals in Spy Drills. The field op released on the 7th of June was the 85th one. The location was the computer in the EPF command room and the mini-game was repairing the system by leading the bot.

On the other hand new igloo and furniture catalogues were released. Back then these two catalogues were separate instead of combined. In the June 2012 furniture catalogue there was a fair amount of new items relating to the Marvel Superhero Takeover, which was that month’s party. Items included the Lamp Post, Fire Hydrant, Hazard Barrel, and Cityscape amongst others. On the other hand the igloo catalogue brought back the Fish Bowl and Cozy Cottage Igloos. Also relating to the Marvel Superhero Takeover, a meteor crashed at the Dock. 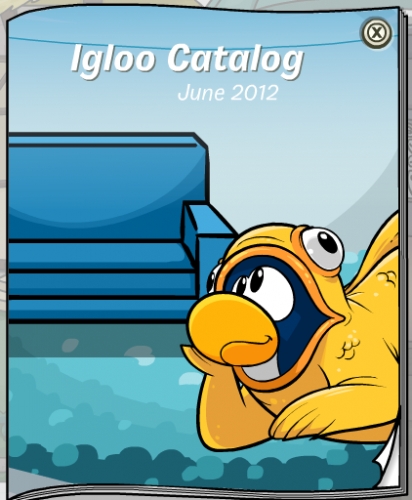 Finally, the Soccer Stadium replaced the Ice Rink like every year and the sports catalogue was updated too. It featured the typical returning items: soccer jerseys, cheerleading outfits, football gear, and more.