Side note from Trainman1405: Answers to yesterday’s trivia are at the bottom + an update on the hundreds of entry comments.

Day 5 of 24 for the Club Penguin Memories 24 Days of Contests 2012 is now here! Starting from the moment this post is published (December 5, 2012 at midnight PST) you will have exactly 24 hours (until 11:59 PM PST of the same day) to enter to try to win the code up for grabs today. The task is different than other days, so make sure you read instructions in each post carefully!

The task for day 5 is to guess where I am in the following picture. (and thanks to Blue9628 for the idea!) Is my penguin hiding behind the igloo goal on the top left (rectangle), the igloo on the top right (oval), the triangle on the bottom left (triangle), or the (poorly drawn) rhombus on the bottom right? My penguin’s name is edited out so you can’t see. Simply leave a comment below saying which of the four spots you think my penguin was hiding behind when I took the picture! You can click on the image below to view it in full size. 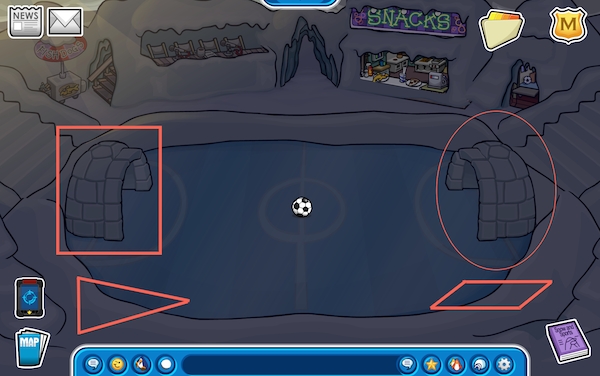 The prize up for grabs for day 5 is: a card-jitsu code. Any entries for this day after 11:59 PM PST will not count. Instead, enter on day 6 once it is published!

Do not cheat by entering multiple times under different names. Make sure you include your email address when submitting a comment (either in the email box or in your comment) so I can give you the code if you win! Good luck to each and every one of you! Remember, all 24 winners will be announced on the 25th of December. You can reference this post anytime for the full giveaway contests information. If you have any other questions feel free to contact me via email or Twitter at any time.

Now, here were the answers to yesterday’s trivia so you can tell if you were right or wrong:

Now about the comments: I am catching up on the over 700 submissions I have had to date. So if you look at past days you may see comments on the post are finally appearing! Sorry for the wait.