Updates on the 2nd of November inside the snowy island of Club Penguin occurred in two different years. The years were 2007 and 2008. The only updated in 2008 was the Halloween Party for that year ending, so as far as that goes there is nothing else that happened on November 2nd, 2008. In 2007, however, two catalogues were updated. It was the first Friday of the month (back then Club Penguin updated on Fridays instead of Thursdays) so the November 2007 Penguin Style catalogue was released in the Gift Shop, which was renamed to the Clothes Shop yesterday. The theme of the new clothing items was warm wear – clothes to keep warm during the Winter. Clothes such as the Blue Turtleneck Sweater, Blue Toque, and Wool Socks were released. Older items such as the Pink Earmuffs were re-released. 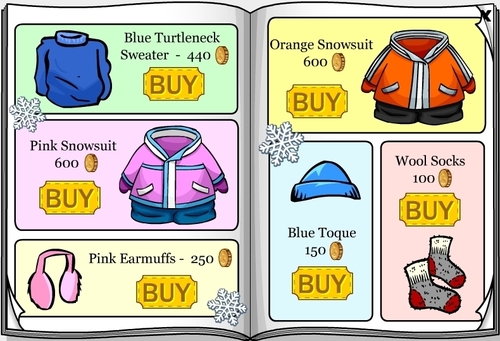 The other update on November 2, 2007 was an updated Sports Catalogue. This was the second one to ever be released, with the first one being in September 2007. Up until the Sports Catalogue was first released in the Sports Shop (which is where the Everyday Phoning Facility currently resides, but when Herbert exploded it with popcorn in Spring 2010 the catalogue got moved to the Stadium) it contained the same clothing catalogue that was in the Clothes Shop/Gift Shop. Anyway, football (American Football, not British Football aka Soccer as we call it in America) items such as the Red and Blue Football Jerseys and Referee Jersey were added to the catalogue.