Happy77 has made a new (and extensive) post on the Club Penguin Blog. It’s about Puffles, which have really been getting a lot of attention lately! The Club Penguin Team will be launching some new updates tomorrow, which isn’t too far away! 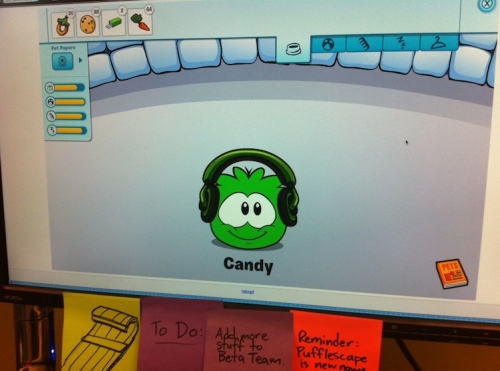 Stat Bars will be added, as well emotes and notifications! Judging by the picture above you’ll also be able to access the Puffle Accessories catalog directly from your igloo, which is a pretty good idea as it saves time.

Also, as you can see there is a To Do list. The Sled Drawing probably has to do with the upcoming 2011 Halloween Party or the upcoming Night of the Living Sled stage play. It looks like soon the Beta Team will get some more items, and Rollerscape is being renamed to Pufflescape. A quick look at Club Penguin’s internal files already reveals this:

I’ve actually known since June that Club Penguin was going to make Rollerscape (Pufflescape) a official game on Club Penguin. I wonder how soon it’ll be launching?