Billybob has made a new post on the Club Penguin Blog. This time it’s a little different. See for yourself:

A little over a week ago, a major earthquake and tsunami struck Japan, causing massive damage. For those of you affected by this disaster, know that everyone in Club Penguin is thinking of you and your family during this time. 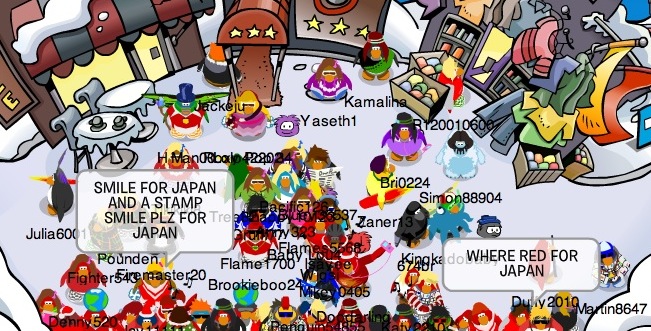 Since last week, we’ve received a lot of inspiring comments and great suggestions from you about different disasters around the world. Many of you have asked about ways to help others when tragedies happen.

Over the next week, we’ll be featuring a few blog posts dedicated to helping your community in times of need. And we’d like you to be involved!

We’ve already seen a bunch of your pictures, screenshots and videos dedicated to Japan. We’d like to feature some of your pictures on Club Penguin to show our support! Send your images to us here. We’ll publish some of them in different places around Club Penguin in the next few weeks.