On the 3rd of December there have been updates in 2010. In 2011 and 2013 there weren’t any in-game updates, however there is some noteworthy news from this day in those two years.

Three updates took place in 2010. The first update was a new login screen, which let penguins know of a special promotion that Club Penguin was running from December 9th to the 31st. During the promotion, any new paid member would receive 12,000 free bonus coins for their penguin account that could spend on items. The second update was a new pin. It was the Snowflakes Pin and was located on the Clock Tower at the Snow Forts. The Snowflakes Pin was the fourth pin to be hidden at the Snow Forts and is the 141st pin overall. The third and final update that year was a new clothing catalogue, the twelfth and final one for the year. It featured a wide variety of holiday items for your penguin such as the Santa and Tree Costumes. 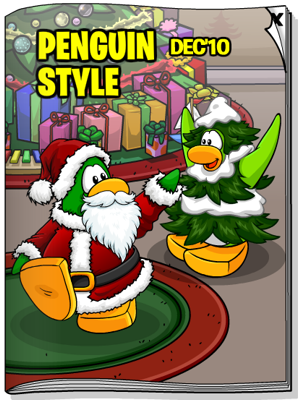 There are also a few noteworthy things that took place in 2011 and 2013, however they were not in-game updates. On December 3, 2011 Club Penguin released their first ever animated short, titled “Never Wake a Sleeping Sensei”.