On the 4th of December Club Penguin has updated in 2009 and 2014. In 2009 there was a new clothing catalogue, a new pin, Rockhopper was spotted in the telescope, and a projector to watch a video was added to the Dojo Courtyard. In 2014 version 1.1 of Club Penguin’s now discontinued Puffle Wild app was released, the Penguin Style was updated for December, the sports catalogue was updated, A Humbug Holiday returned to the Stage, the Merry Walrus Parade began, and the featured postcards were updated.

The December 2009 Penguin Style featured new holiday themed items such as the Reindeer and Tree Costume. In total three new pages were added to the catalogue for the month. There were many hidden items in the catalogue, namely musical instruments. 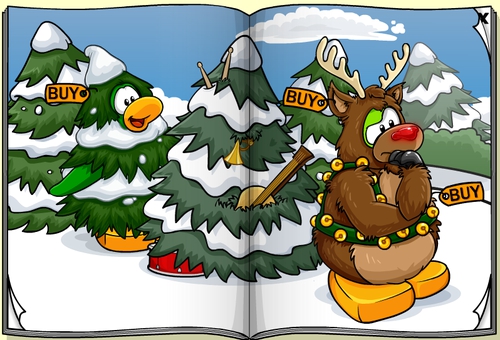 Also on the 4th of December in 2009 Rockhopper’s ship, The Migrator, was spotted in the telescope. Rockhopper tends to come every year for the Holiday Party/Coins For Change and like usual for this time of year  his ship was decorated in green for the holidays.

The final update on this day in 2009 took place at Dojo Courtyard. A video projector was added so players could watch a Card-Jitsu Fire video. 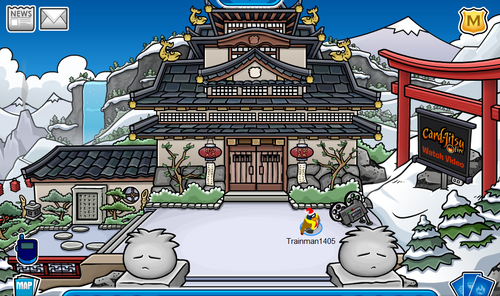 Just like 2009, 2014 also had a lot of updates. Outside the virtual world Club Penguin’s now discontinued Puffle Wild app was updated to version 1.1 and now available worldwide, as it was originally soft launched in Australia and New Zealand. Version 1.1 brought some bug fixes and performance optimisations.

Inside the virtual world a few catalogues were updated, and more! The December 2014 Penguin Style was the first ever catalogue to donate coins for Coins For Change. From December 18th to January 1st, all proceeds from the catalogue went towards Coins For Change. The theme of the new items for that month isn’t that hard to figure out: winter and the holidays! 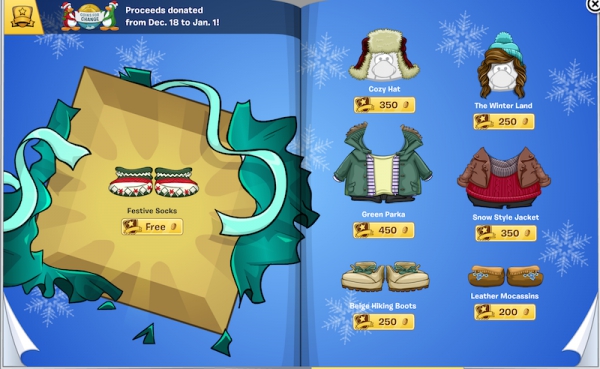 The Penguin Style wasn’t the only catalogue updated. The Sports Catalogue was, too. There weren’t any new items in the catalogue, it was all returning ones. The items were hockey and ice skating related.

Another update in 2014 was A Humbug Holiday returning to the stage. It’s been at the Stage every year since 2011 and this was its fourth and final showing. The play is a parody of A Christmas Caorl by Charles Dickens. 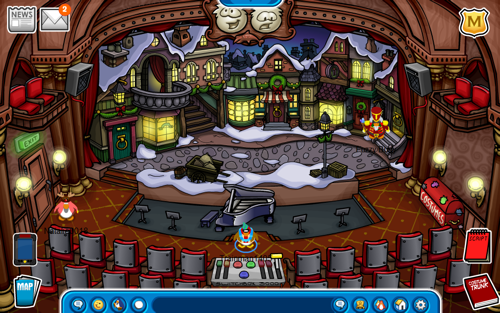 The last big update in 2014 was the start of the Merry Walrus Parade. It was a mini-event, so there was no free item. The Ski Village was lightly decorated and from there you could access the parade, which had a Merry Walrus float. 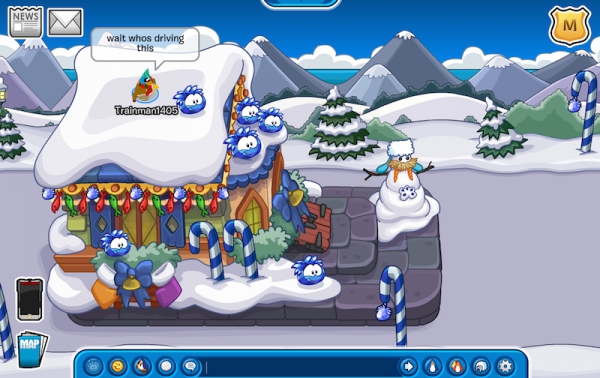 The final update in 2014 was the featured postcards being updated. The page now listed the Your Biggest Fan, Thanks for the Gift, Coins for Change, and Donate postcards.