On the second of January there were two updates in 2009, three updates on Club Penguin in 2010, and two in 2014. In 2009 a new pin and a new clothing catalogue released. In 2010 a new pin was released, fireworks were added to the Iceberg and Ski Hill to celebrate the new year, and lastly a new Penguin Style catalogue was released for the month. The 2010 updates were actually meant to happen on the 1st of January, but ended up being delayed an extra day.

The pin released on the 2nd of January in 2009 was the Gingerbread Man Pin. It was Club Penguin’s 80th pin and was the fourth pin to be hidden in the Lodge Attic. It was hidden on the left side of the room, located underneath the window. The other update in 2009 was a new Penguin Style catalogue. The new items were dance outfits and fiesta outfits for that month’s Waddle On Dance a Thon (where Cadence and the Dance Contest game were introduced) and the Winter Fiesta. The January 2009 Penguin Style also had a special note in it, which you can read below. 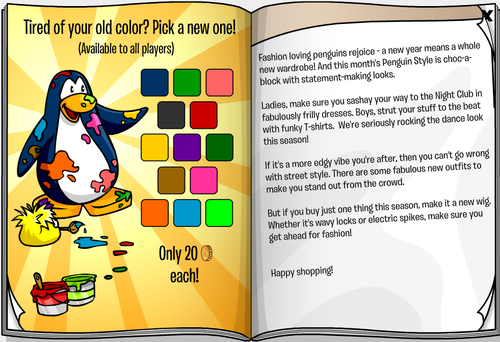 Fashion loving penguins rejoice – a new year means a whole new wardrobe! And this month’s Penguin Style is a choc-a-block with statement-making looks.

Ladies, make sure you sashay your way to the Night Club in fabulously frilly dresses. Boys, strut your stuff to the beat with funky T-shirts. We’re seriously rocking the dance look this season!

If it’s a more edge vice you’re after, then you can’t go wrong with street style. There are some fabulous new outfits to make you stand out from the crowd.

But if you buy just one thing this season, make it a new wig. Whether it’s wavy locks or electric spikes, make sure you get ahead for fashion!

The 2010 updates on the 2nd of January, which were meant to be released on the 1st but delayed, included a new pin, fireworks, and a new penguin style for the month. The pin was the Fireworks Pin. It was Club Penguin’s 110th pin and was the fifth pin to be hidden at the Lighthouse. Speaking of fireworks, to celebrate the new year Club Penguin added fireworks to the Ski Hill and Iceberg, which is a yearly tradition. The final update in 2010 was a new clothing catalogue. The January 2010 Penguin Style featured new make your own t-shirts as well as some other articles of clothing. When the catalogue was initially released there was a small error: on the cover it said Jan 09 rather than Jan 10, as they forgot to change the year. This typo was fixed shortly after being released. 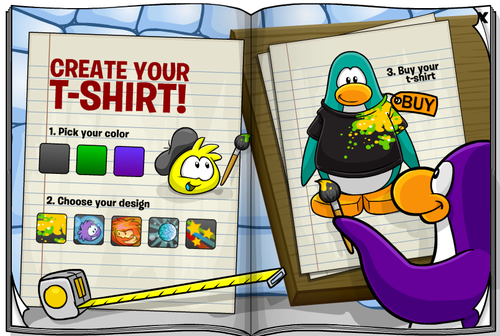 In 2014 there were two updates. The first one was a new login and logoff screen was released to begin advertising that month’s party, which was the Prehistoric Party. The 2014 Prehistoric Party was Club Penguin’s second one. The other update was the 2013 Coins For Change results were announced, with the results being posted at the Snow Forts. A grand total of 25,172,132,330 coins were donated.