A sneak peek image of the Plaza during the 2014 Halloween Party has been uncovered in Club Penguin’s files and boy, does this look like a disappointing party. I don’t want to jump to any conclusions, but it seems like the Puffle Hotel is going to be the ONLY decorated area of the island during the Halloween Party. If so, that’s terrible…and expect a big post when the party is released. Hopefully this sneak peek is incomplete.

You may recall me mentioning in my previous sneak peek post that the main focus will be a quest at the Puffle Hotel. That’s true, as you can see in the image below the hotel has been expanded and there is a special glowing entrance. 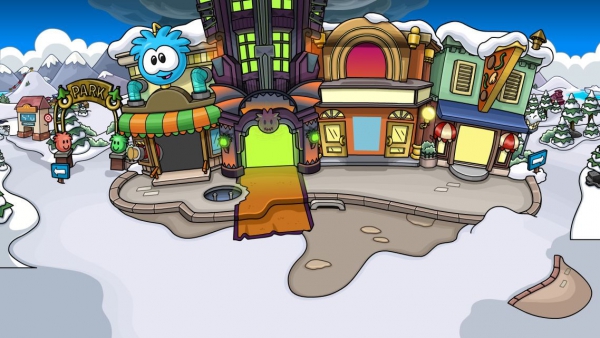 If you look at the sky, you’ll see it’s dark ONLY where the hotel is. That’s not a good sign at all. There are a few arguments, such as:

I guess we’ll know for sure on October 24th, but I sure hope the island is more decorated than what I see above. Otherwise I think many of us are going to be disappointed by this year’s Halloween Party.

Anyway, on to the music. There are tons of sound effects and a music track. In the music playlist below I’ve included some of the many sounds you will hear at the 2014 Halloween Party.

Thanks to Pen50gi for his help on alerting me about this and finding the image and music.