This week’s meetup hosted by Chattabox will be taking place in the future in honour of the Future Party! The meetup is at its usual time of 11:00 PM PST Wednesday night. Here are all of the details if you are interested:

The Future Party is here!!! And how much fun is the future?! I’m having such a great time exploring, eating out at the Blast-Off Bistro and trying on all the awesome future-inspired outfits in the catalogue. Check out the picture of a few of us rockin’ out in the Dance Dome. 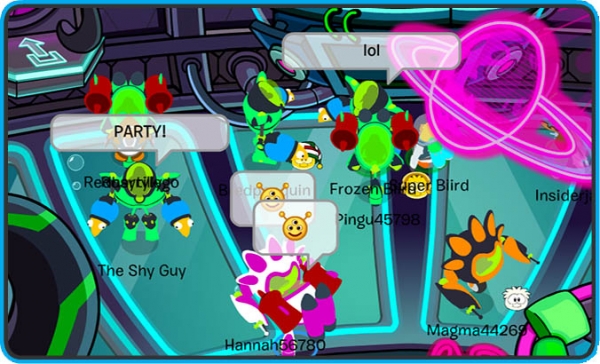 I’ve also been battling meteors and getting ready for The Protobot Battle. But I think I’m in need of a little help. So for this weeks party, I’m calling all penguins to join forces and go battle those meteors. Come prepared with your “Fish Sticks”, “Big Red”, “O’Blaster” or “Cadet Jetpack” and we will re-group at the new galactic zoo that has opened up for this months party (how cool!).