There were a few updates on the 10th of April in 2009. The biggest update was an Easter Egg Hunt. The other updates were a new pin and Quest for the Golden Puffle returning to the Stage.

The Easter Egg Hunt in 2009 was Club Penguin’s fourth one. The egg’s locations were as follows:

The prize for finding all eight eggs was the Pink Bunny Ears, an item first released at the 2006 Easter Egg Hunt. To go along with the Egg Hunt Club Penguin sent everyone a postcard letting them know about it. Club Penguin sending a postcard to everyone for a party or big event was common in 2008 and 2009. 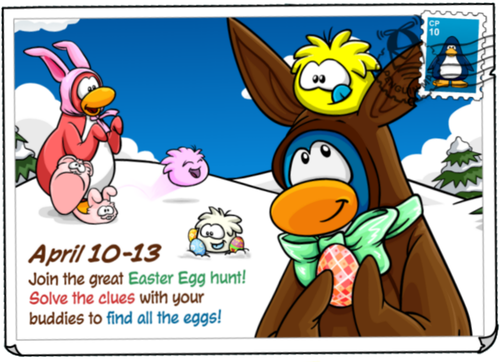 The new pin was the Chocolate Bunny pin. It was located in the bottom left of the Forest room on the rock.

Finally, Quest for the Golden Puffle was released at the Stage for a third time. Its previous showing was in December 2008. It was added to the Stage because it won the 2009 Penguin Play Awards.