As of 2012, updates on the 11th of December have only happened on a single year in Club Penguin History.That year is 2009. There was a mixture of minor and major updates. The minor updates are Holiday Party room construction, the postcard catalogue being updated, and Rockhopper arriving. Rockhopper’s catalogue featured the following items: Coins For Change Background (free), Tricorn Hat (350 coins), Silver Bell (75 coins), Coins For Change Banner (furniture item – 500 coins), and the Coins For Change Donation Station (furniture item – 75 coins). As for the postcards, one of the postcards was one you could send to your friends, and they could open it to receive the Candy Cane Hat item. Rockhopper arriving was for a big update – Coins For Change 2009, the third one at the time, had begun. Penguins could donate coins like usual to help change the world. You could donate to kids who are poor, kids who are sick, and the environment. 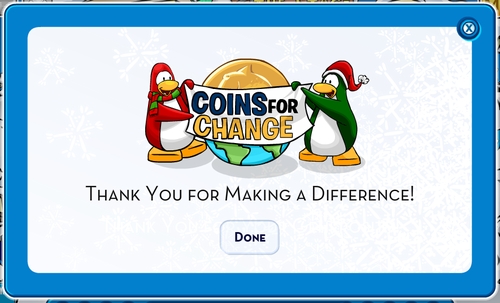