Update: These pictures have actually originated from Callmechump on the Club Penguin Wiki.

Yesterday around mid afternoon Penguin Standard Time, Billybob made a rare appearance on Club Penguin in the server Sleet. He didn’t stay on too long (and I missed him, I was busy trying out Slender Man) but he did reveal that the Fair is returning next month! I had suspicion that it would be returning when I saw the upcoming events listed in the newspaper.

Costumes to clown around in. Moo! Coming soon to the Gift Shop.

Run away and join the circus with Fair furniture items for your igloo!

The furniture catalogue update practically gives it away. Billybob gave it away even more, though. Take a look at these pictures from Orangeblue1.

What did Billybob also say? We can finally save tickets when we log off and back on! At previous Fall Fair parties, you’d lose any remaining tickets upon logging off. It’s taken six years, but this feature is finally here. 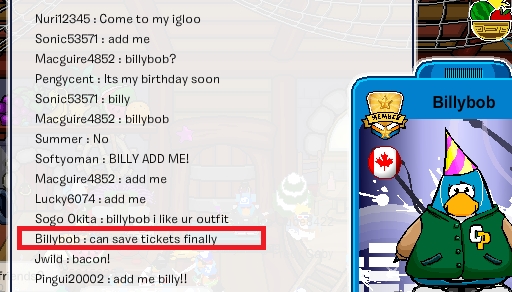 The first Fall Fair party was in 2007 and we have had one every year since. Prize booths have been at the Fall Fair every year, but the 2008 Fair was the first one with a member only prize booth.

In 2009 the Fall Fair was just renamed to The Fair. (Thanks to Jjoeyxx for the correction) If you’re interested, you can check out the past Fair parties at the following pages:

Finally, it is possible that the Puffle Handler will be making an appearance next month. Do you think there will be some new games at the Fair? I sure hope so!

13 thoughts on “Billybob Confirms Club Penguin Fair 2012 With Ability To Save Tickets!”