On the 31st of May there has been updates in 2011 and 2012. The 31st of May in 2011 was one of the few days Club Penguin updated on a Tuesday instead of Thursday. Herbert attacked the EPF, the sports catalogue was updated, and along with the updated catalogue, once again the Ice Rink was replaced with the Soccer Stadium. In 2012 a new pin was hidden on the island and a new clothing catalogue was released.

In order to attack the Elite Penguin Force, Herbert used the hydras from the Medieval Party 2011 that had just ended. This event is known as the Battle of Doom. If you defeated Herbert you would receive the EPF Badge Pin and Hydra Head furniture items. Here is a video of the battle in action:

As for the sports catalogue, the new items were soccer (football) themed to go along with the Ice Rink being replaced with the Soccer Stadium. The catalogue had six pages of clothing items and one page of furniture items.

A year later, in 2012, Club Penguin also updated. The first of two updates was a new pin. You could find the Bean Bag Pin at the Coffee Shop. This pin is Club Penguin’s 206th pin overall and is the tenth pin to be hidden in that room. The other update was the June 2012 Penguin Style being released. The main theme of the new items in this catalogue was superheroes. 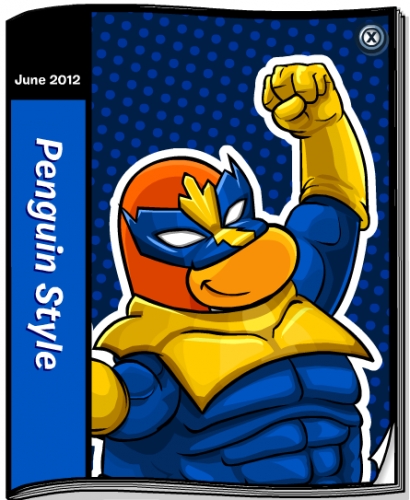