On the 18th of May Club Penguin has updated in 2007 and 2011. In 2007 there was an event taking place involving the all new Forest room and a new furniture catalogue was released. In 2011 there was an update to the secret beta team section on Club Penguin’s website.

On this day in 2007 there was a scavenger hunt, or at least you could classify it as that. If you went to the Mountain a map would blow across the screen, and you had to follow it across the island until it got stuck in the clock tower at the Snow Forts. From there you could click on it to add the map to your inventory, then from there you could take a look and view it. It’d show you where the location of the newly discovered Cove was going to be and you’d be able to see where the new Forest room was. Here’s a video showing the whole thing, since it’s a bit difficult to explain:

Also on this day in 2007 a new furniture catalogue was released for the month. It contained items such as the Concert Lights, DJ Table, CD Rack, and Pop Art Painting. 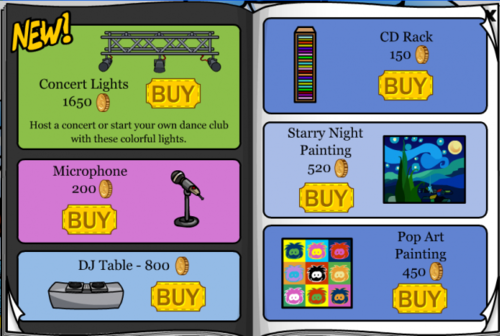 That’s all for 2007. In 2011 there as an update, however it wasn’t in-game. Club Penguin updated the secret beta team section on their website. Puffle Hat Ideas and Skyscraper were re-added to it. In addition to that, they now worked, as when they were originally added they were broken and did not function at all. Rollerscape History also now worked, as that too was originally broken. Finally, a new game called Snow Cone was added, however it didn’t work.