On the 17th of April Club Penguin has updated in 2009 and 2014, plus in 2015 Sensei was visiting the island. In 2009 there was a new furniture catalogue and a new igloo catalogue. In 2014 there were all sorts of updates such as the Puffle Party, the Puffle Park room being released, cat and dog puffles being released, the Club Penguin app coming to iPhone and iPod Touch, and so much more. It’s also worth noting that on this day in 2013 Polo Field was suspended from Twitter for a few days.

Gardening was the main theme of the April 2009 furniture catalogue. In the catalogue you could find all sorts of different plants as well as items such as the wheelbarrow and picket fence. The igloo catalogue contained brand new new pink carpet. 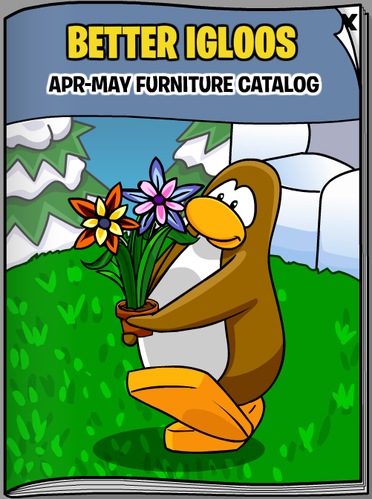 The 17th of April was a very busy day for Club Penguin in 2014. First off, the month’s party, the Puffle Party, began. Rooms were decorated, PH visited, the Puffle Park room was released, orange tabby cat and blue border collie puffles made their tricks, puffle tricks were introduced, and also a new login and logoff screen to advertise the new park and puffles was added. 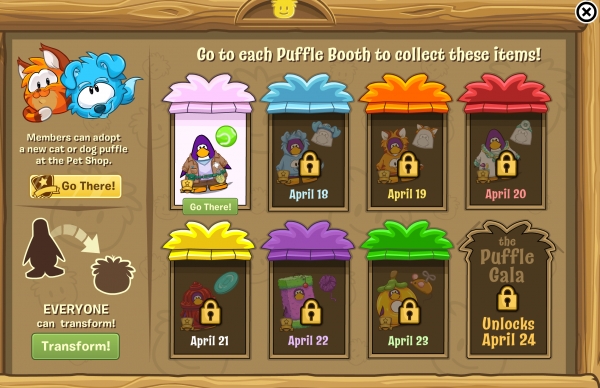 In addition to all of that the puffle merchandise catalogue was updated with new hats and food. The puffle handbook was updated to give information about the two new puffles, too.

There was also a new pin hidden on the island on this day in 2014, the Puffle Park Pin. It was hidden at the School. The Puffle Park Pin is Club Penguin’s 275th pin overall and is the first pin to be hidden in that particular room.

The final update on this day in 2014 has to do with Club Penguin’s mobile app. It hit version 1.4, and as of this update it was now no longer limited to running only on the iPad. It was now fully functional on the iPhone and iPod Touch, too.

Finally, in 2015, Sensei was now waddling around the island for a few days in celebration of Haiku Day.