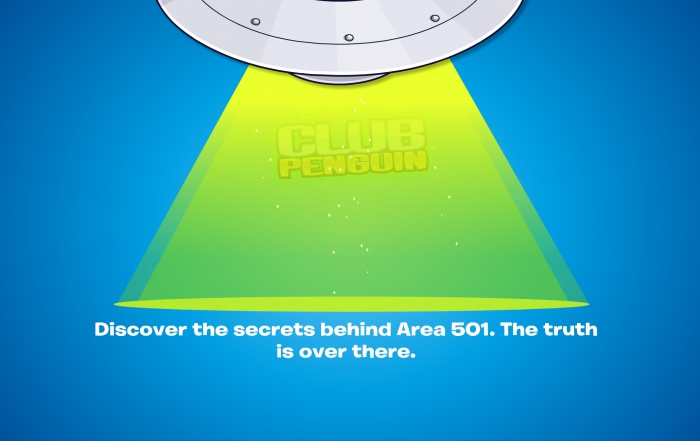 Discover the secrets behind Area 501. The truth is over there.

When you first sign on Jet Pack Guy will talk to you. 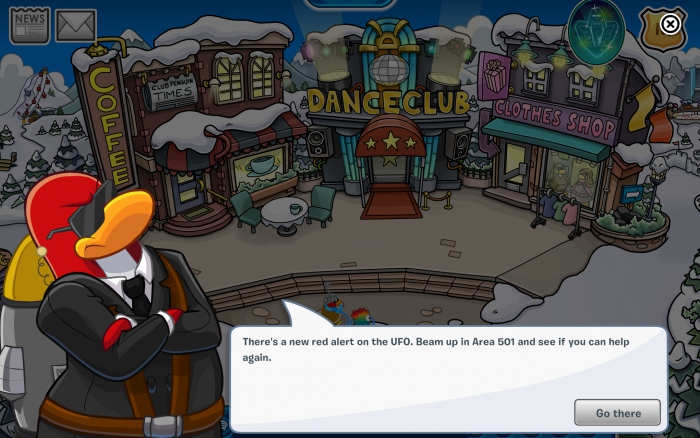 There’s a new red alert on the UFO. Beam up in Area 501 and see if you can help again.

Area 501 is a temporary room at the Dock. In the room you’ll see Jet Pack Guy standing next to Herbert. What a size difference between the two! Lol. 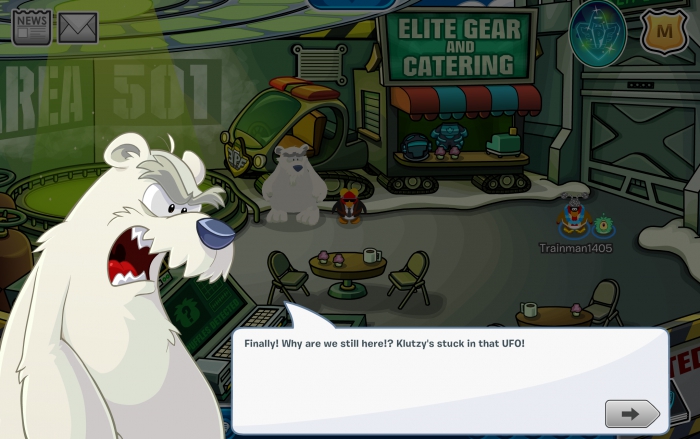 Finally! Why are we still here!? Klutzy’s stuck in that UFO! 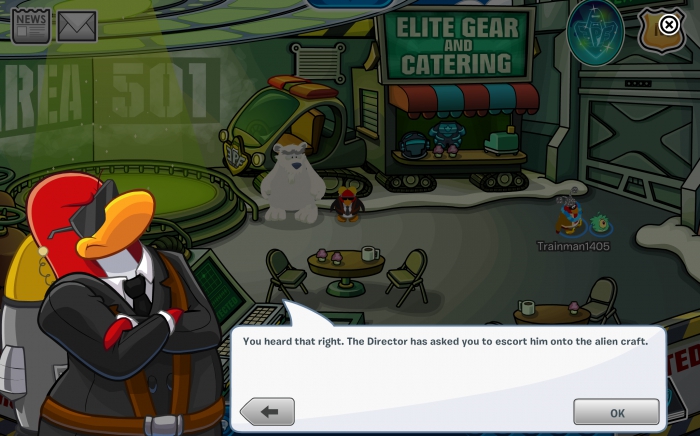 You heard that right. The Director has asked you to escort him onto the alien craft.

Before you board the alien craft, go to the elite gear and catering section. The new EPF handbook has also been placed in this room. Give it a read over if you haven’t already! 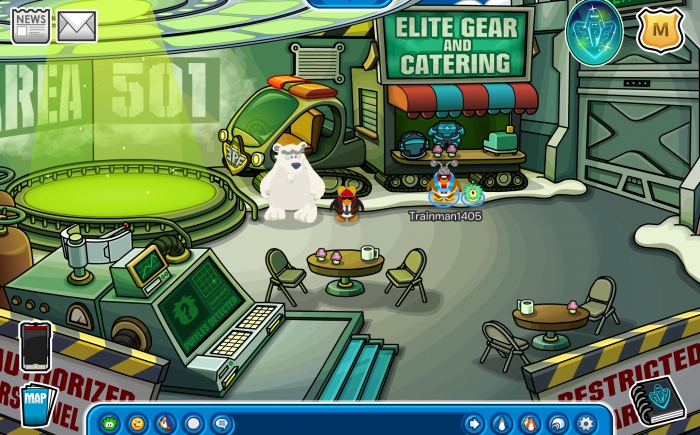 When you board the alien craft you will spot Klutzy chilling with the alien puffles. 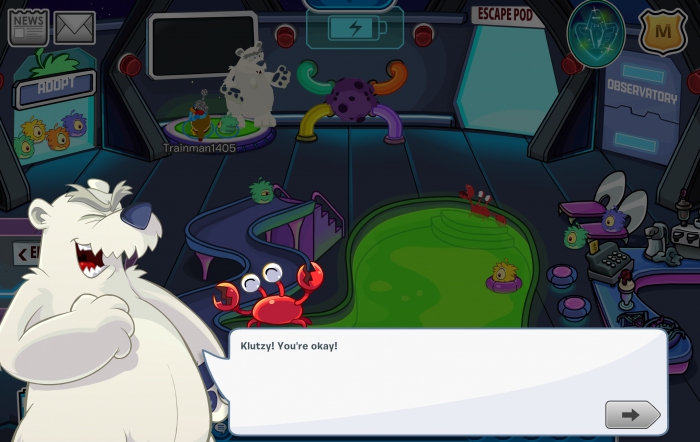 Now that Herbert has Klutzy he goes back to menacing. 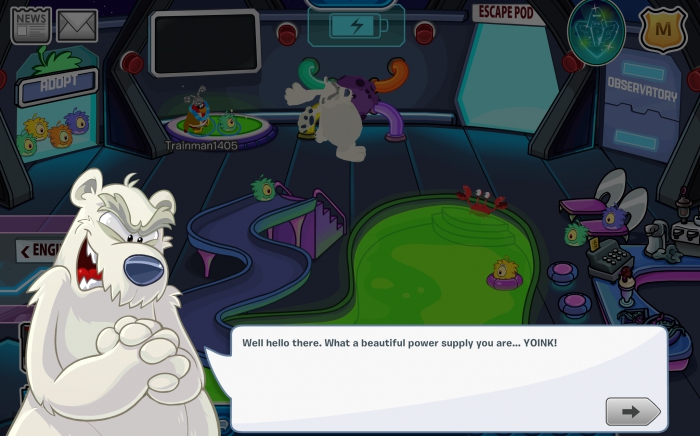 Why hello there. What a beautiful power supply you are… YOINK!

And then he will go to leave with the power supply in hand. 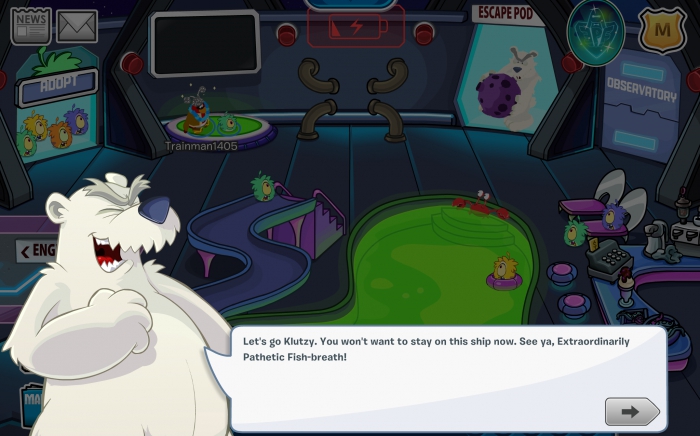 With the power supply gone, the ship goes into red alert mode. 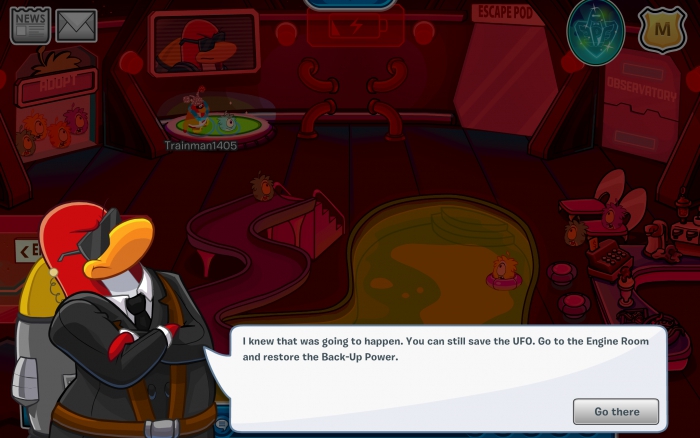 I knew that was going to happen. You can still save the UFO. Go to the Engine Room and restore the Back-Up Power.

Every few days you can do a different task in the engine room. They are back-up power, emergency thrusters, gamma shields, and gyro stabiliser. 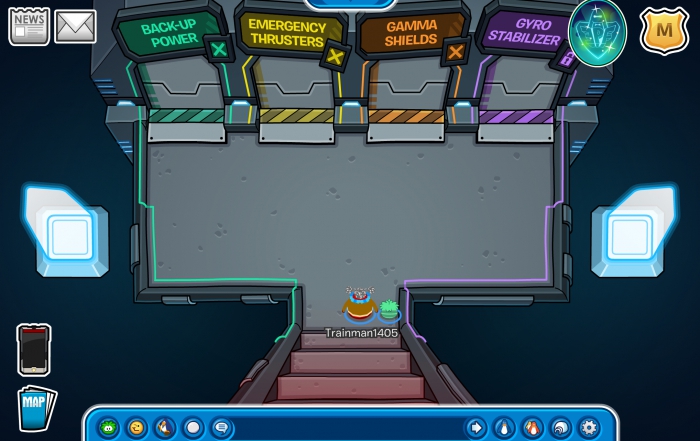 You have to complete the maze in the dark. It’s a little maze and you have to collect the keys to restore the back-up power. You can’t click your penguin in these rooms, so if you decide you want to edit your outfit you have to click the icon in the bottom bar instead. 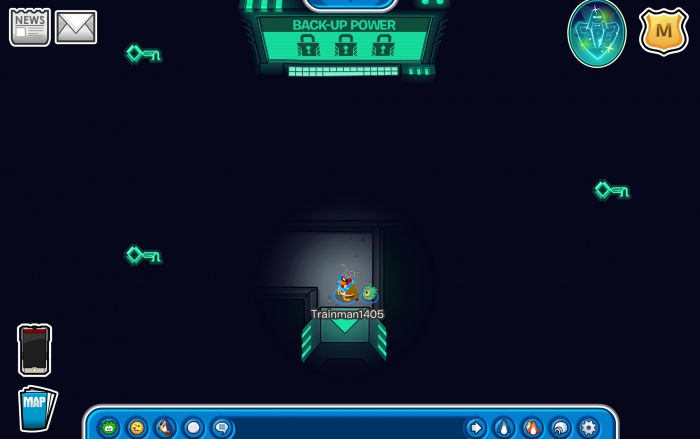 Once you get the keys the back-up power will be activated and you can collect a background.

The process is the same for the Emergency Thrusters. 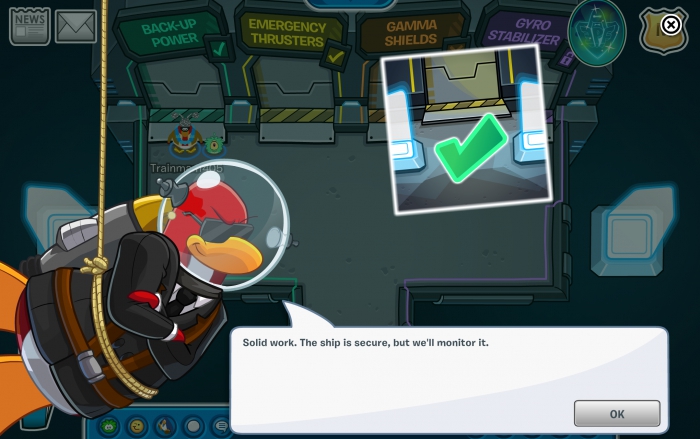 For the Gamma Shields it’s broken into two rooms instead of just one. 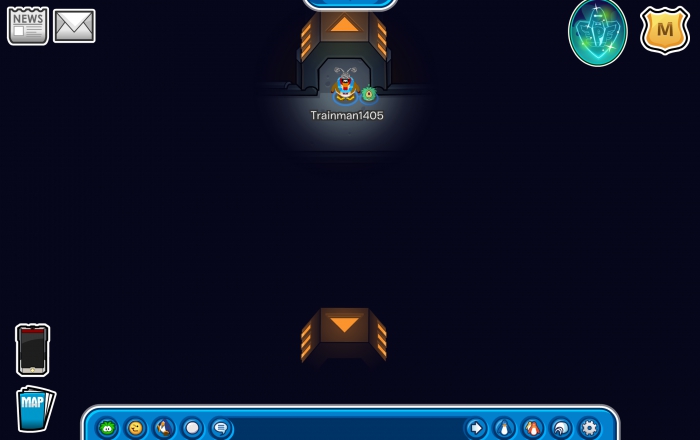 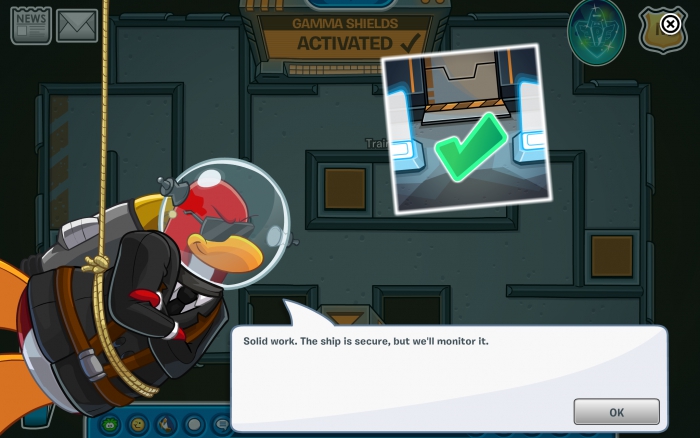 New to this party are alien puffles, which come in four different colours. Green, yellow, orange, and purple. 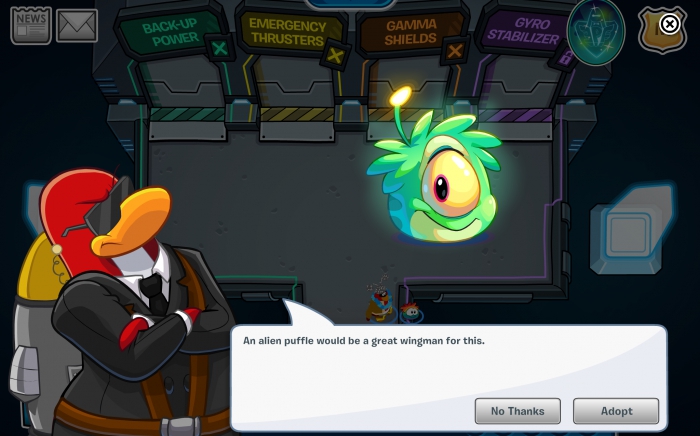 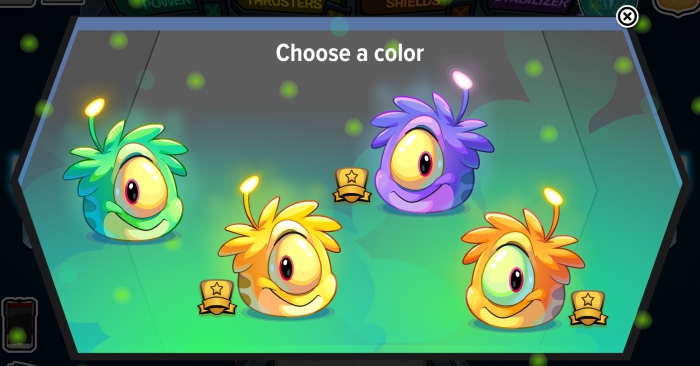 All players can adopt the green one. 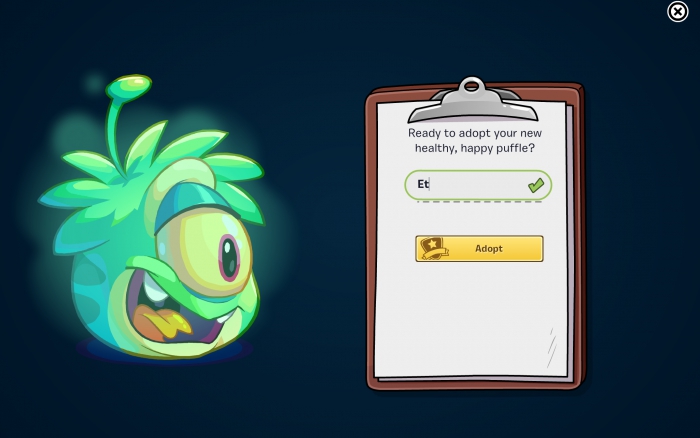 You can adopt them on the ship or from the party interface. 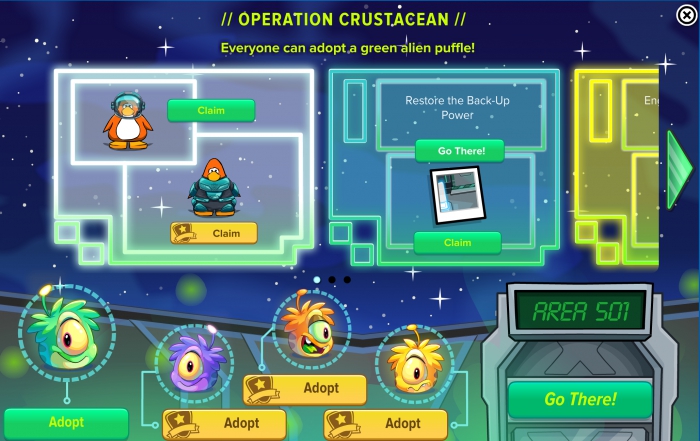 On the 27th of November the fourth and final task will unlock. 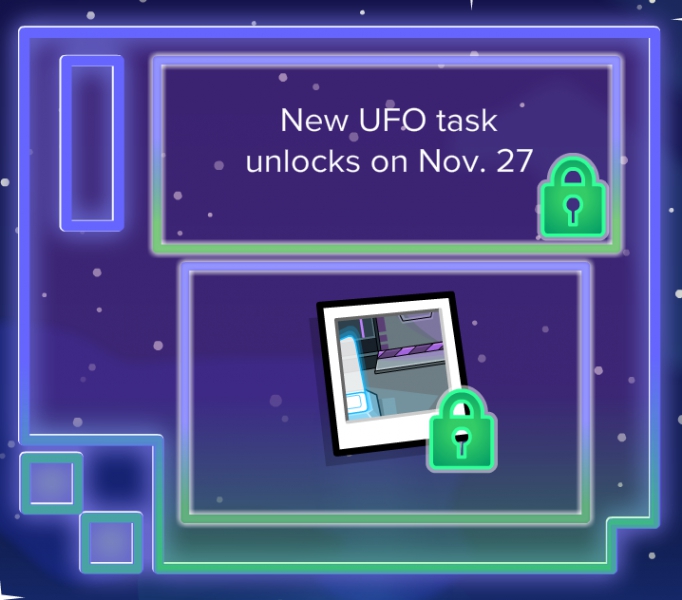 There’s a new login screen, apparently Alien Puffles will be available until February. 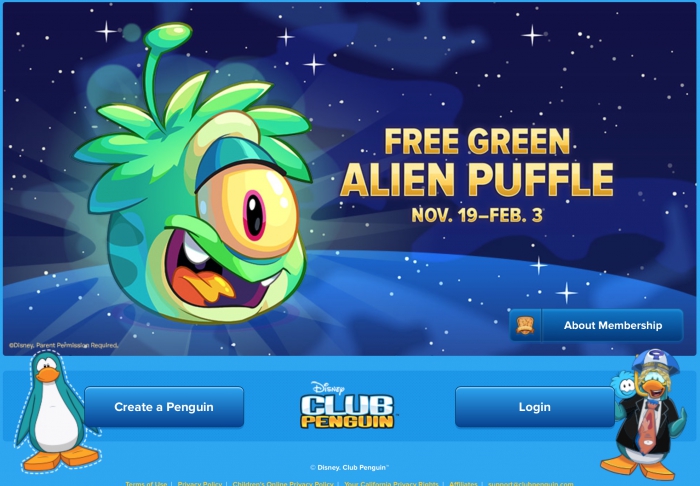 Rookie is visiting, so you may run in to him!

It’s decent. I’m glad we had another EPF mission finally, especially one that’s a bit difference since its focus wasn’t stopping Herbert, it was helping him. I liked the intensity of Operation Blackout and Operation Puffle a little bit more, but this one was still good. I’m glad there was at least a little variation on the task puzzle. Not that difficult unfortunately, but it does take a couple minutes to solve the maze in the dark.

The big thing that irks me about this party is a hole in the plot. The alien craft went from abducting penguins around the island to chilling at Area 501 and letting us board. How/why???

Also, I think this party would have been a great time to make Jet Pack Guy an in-game mascot since he’s calling the shots. Oh well.