On the 31st of August there’s only been two updates, both happening in 2007. The Sports Shop, a room that exists no more, now had its own very own catalogue instead of also hosting the Penguin Style. The other update was a new pin.

Up until this day in 2007 the Sports Shop, which was located where the Everyday Phoning Facility is, held the Penguin Style catalogue. However, things changed and now the first Sports Catalogue was released. You could buy game upgrades for Catchin’ Waves. A couple years later these surfboards were moved into their own Game Upgrades catalogue at the Cove. Once the Sports Shop ceased to exist this catalogue was moved to the Stadium. 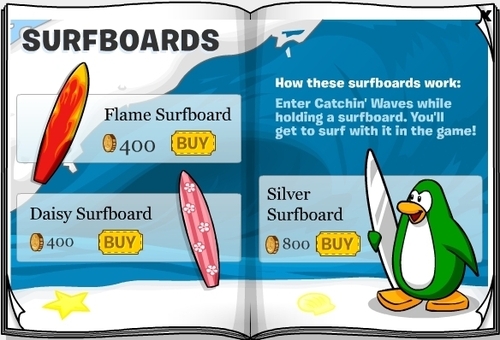 The other update in 2007 was a new pin, the Baseball Pin. This pin is Club Penguin’s 40th pin and was the first pin to be hidden at the Boiler Room.