On the 20th of May Club Penguin has only updated in 2011. That year the Medieval Party began, the postcards were updated, a new stamp was released, a new pin was hidden, and Underwater Adventure was at the Stage again.

The 2011 Medieval Party was Club Penguin’s fourth one. As usual the whole island was decorated in a medieval fashion, and members could go on three different knights quests to collect items, with the third one being brand new. Nonmembers could collect the Purple Wizard Hat at the Lighthouse. At the Gift Shop (Clothes Shop) there was a special party catalogue with some medieval items such as the Green Hooded Cloak and a selection of tabards and shields. The postcards were updated too, adding some for the Medieval Party. Finally, a new stamp was added. Called Noble Knight, you could unlock it by wearing a knight costume at the Medieval Party. 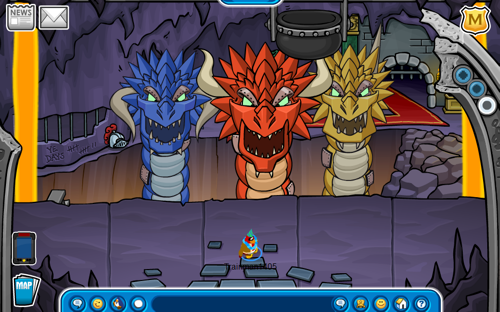 Club Penguin also released a new pin on this day in 2011, the Brazier Pin. It is Club Penguin’s 162nd pin and is the tenth pin to be hidden at the Boiler Room. Just like at all the other medieval parties, you had to use the Pin Maker 3000 to create it.

The final update in 2011 was Underwater Adventure returning the stage for a third showing. There was a special Mermaid Shell Pin you could collect on the set.