Updates on the 5th of September have happened in 2008 and 2013! On this day in 2008 two catalogues were updated. The first of those two catalogues was the Penguin Style, which received its usual monthly update of new items. The theme this time was back to school and fall fashion outfits. New items in this catalogue were the Denim Hip Hop Hat, Layered Lavender Outfit, Denim Purse, Sea Green Outfit, Vinyl Messenger Bag, Green Paisley Bandana, Blue Hoodie, Tweed Hat, Tweed Coat, Painter’s Overalls, and the Scarlet Leaves Background. Old items returning to the catalogue were the Pink Backpack, Blue Backpack, Designer Glasses, Blue Duffle Coat, Pink Hoodie, Igloo Background, and Apples Background. 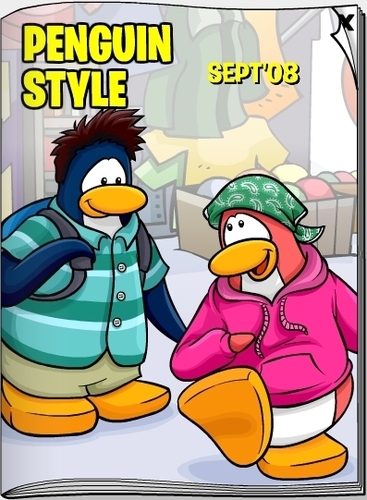 In 2013 there were a lot more updates compared to 2008. The Coconut Smoothie Pin was hidden at the Hidden Lake, the Cove got a new look, its current one, that month’s Penguin Style was released, there was a new login and logoff screen advertising the 2013 Medieval Party, the postcards were updated, and Puffles now had a cloud above them for digging. On Club Penguin’s website you could also now download “Party In My Iggy” for free. In the September 2013 Penguin Style there was a new change that no previous catalogue had: all the buy item buttons now had a membership badge on them to designate they were for members only. As you may have guessed since September 2013’s party was the Medieval Party, the style of the new clothes was medieval.