In January of this year Club Penguin released a feature new players would see on the map: quests. Quests were made to help new penguins familiarise themselves with the island, such as finding the clothes shop and pet shop. Then in April 2014 Club Penguin made the quests button visible on the map for everyone, although we are unable to do anything with it. Based on information provided by V0rtex, there will be quests on Club Penguin’s mobile app next month. Currently when a new penguin is created these are the quests it has to endure: (I still think it’s unfair new penguins get these items and old ones do not!)

Now, on to the details. Kind of like Club Penguin has us complete a task at parties in order to obtain items, on the Club Penguin mobile app during next month’s Frozen Party Club Penguin will be utilising the quest feature. This means an app update will be on the way sometime between now and August 21st, when the party is released. 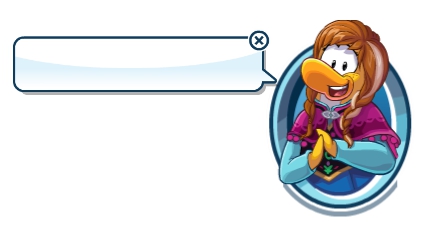 At the Frozen party on the mobile app (and maybe even the desktop version of Club Penguin) characters from Frozen will talk to you and give you the activity for the day and update you with future events. They will be telling you where to collect snowflakes from each room and to earn items until you can access the Ice Palace a week after the party begins on August 28th.