In 2006 that month’s Penguin Style was released. It was the first one to contain shoes, which many penguins requested. 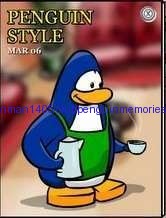 There was a new update for Jet Pack Adventure with some minor tweaks. Changes included a close button to leave the game and also adding the Stage to the Plaza room.