On the 5th of January in 2006 the new clothing catalogue was released for that month. Not much is known about the new contents for that month however it is known that the Pink Hoodie made its first appearance. Items such as the Night Vision Goggles, Red Cape, and Pink Earmuffs were also inside. 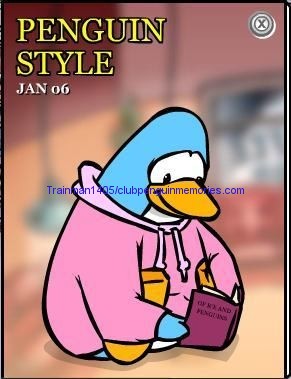 In 2007 there was a new clothing catalogue and also a new pin. The January 2007 Penguin Style featured items such as the Red Turtleneck Sweater, Earflap Vest, Matador Outfit, Festive Sombrero, and the Black Cowboy Hat. As for the pin, it was the Apple Pin and could be found at the Pizza Parlour. This was Club Penguin’s 23rd pin.