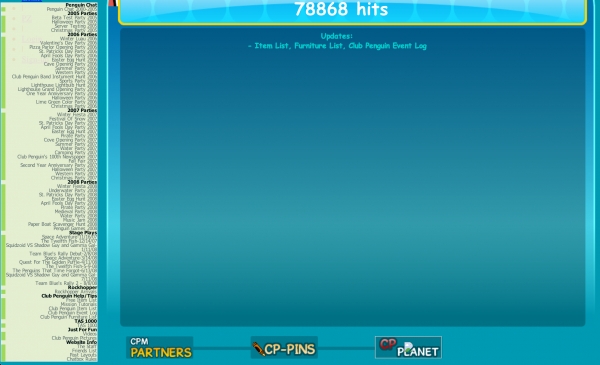 The rest of the original Club Penguin Memories homepage (the blank spot had an XAT chat box) The left side had a list of all the pages, the top under the header had the total views, the text box listed recent page updates, and the partners at the bottom were related websites I exchanged links with.

Time sure does fly, that’s for sure. On this day five years ago, back on December 7, 2007, I was home from school sick. For about a year (December 2006 – December 2007) I had been working on Club Penguin websites, mainly mine, built with the Piczo platform. Being home and bored on that December 7th day, I decided to start a new project. Instead of having a Piczo website about my penguin and myself like most people, I made a website featuring all the past parties on Club Penguin. (at the time it wasn’t much, just October 2005 – December 2007) It only took a few hours to set up. It actually did pretty good for a Piczo Club Penguin website from the start, reaching around 100,000 views in a year, with the most popular day being in Summer 2008 when it got around 1,000 visits over a 24 hour period. Over time I expanded it a little bit, adding each month’s new party and also Stage Plays. The chat box on the homepage was really popular, too.

In January 2009 I decided to do the Club Penguin Memories Improvement Project. For a long time (January 2009 – August 2009) I was completely redoing the website, expanding it. Instead of being just parties and stage plays, I added everything you see on here now – catalogues, rooms, games, newspapers, merchandise, and so much more. It was tons of work, and I don’t really know how I managed to make something that complex, since I had to make about 1,000 new pages, find and upload hundreds of thousands of pictures, make each page look to my liking, type everything up, etc.

The site still did well pretty good. Not as good during its first year, but still good. In Spring 2010 I was busy between school and participating Track and Field so I ultimately called it quits for a bit. I didn’t quit Club Penguin, I just cancelled my membership from May – October 2010 and also did not update the Club Penguin Memories Piczo.

In October 2010 I decided to come back as my schedule was more free. I decided to ditch Piczo for WordPress though, which is what I use now. It had lots of benefits – easier to manage, I could get a domain, I could blog, and so much more. Plus the Piczo website was getting pretty broken, as the hit counters stopped working and the shoutboxes (kind of like the comments on here) were getting nothing but spam.

This time it only took 3 months to save all the images off of Piczo, upload them to WordPress, and create the roughly one thousand pages I needed to. Still a lot of work, but again I did it. I finished towards the middle of December but continued to tinker with the website. The domain was bought and I was getting ready to launch the brand new Club Penguin Memories blog.

Then on January 1, 2011 I officially announced the ClubPenguinMemories.com website to the world. From then on I have continued to the latest and greatest Club Penguin Updates (or “cheats” as many people call them) as well as updating the pages and creating new ones as needed. It’s a lot of work, but I’ve still got it in me and welcome the challenge with open arms.

Club Penguin Memories continues to grow, and I’m very humbled by this. When I created the first/original Club Penguin Memories website on Piczo on December 7, 2007 I did not expect it to be this popular. The same goes for when I moved from Piczo to WordPress. The whole purpose of this was not for fame, just to make money, or anything like that. I really enjoy blogging and maintaining websites and plan to continue doing so in the future.

It’s actually a good thing I moved from Piczo to WordPress, as a while ago a lot of the content on my Piczo website disappeared – it’s a blank page with a blue background now. In fact, Piczo recently announced they are closing down and deleting all the websites made with the service. What a shame, but I figured it would happen eventually.

So thank you for making Club Penguin Memories a huge success everyone, I couldn’t have done it without you. Let’s have a party, shall we? I plan to have two, one on December 15th and one on December 16th. They will be at different times so those who can’t attend one can possibly attend the other one. You’re free to attend both though! Stay tuned for the time and place… 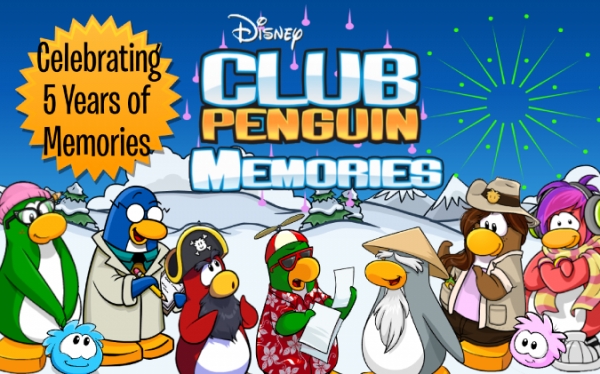