On this day in Club Penguin History, the October 2006 Clothing Catalogue was released. Another thing also happened on this day in 2006 – I (Trainman1405) purchased a Club Penguin membership for the first time ever. With the exception of a few months, I have been a member on Club Penguin ever since then. Yes, lots of money.

Anyway, the new clothing catalogue had some items for Halloween as you would expect. The first page contained the Black Cape, Red Cape, and Superhero Mask, which is now known as the Black Mask. (It’s kind of funny it was originally called the Superhero Mask, since at the Marvel Superhero Takeover it was an item for villains…) The Red Cape and Superhero Mask were returned from 2005 and the Black Cape was new. The next page featured the Clown Costume, a brand new outfit at the time. The page after the Clown Wig, Clown Suit, and Clown Shoes was empty and items were filled in during that year’s Halloween Party later in the month. The items added later were the Ghost Costume (returned), and the Wand, Fairy Wings, and Skeleton Suit – three new items. 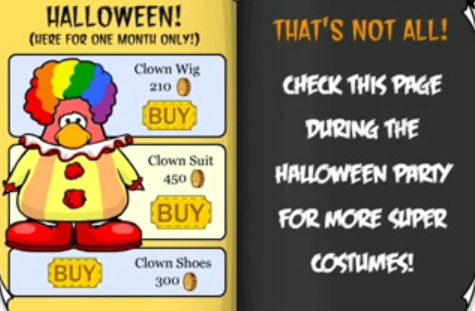