On This Day In Club Penguin History – July 9

On this day two years ago in 2010 the third ever Music Jam was released on the island. Like usual the Penguin Band and Cadence appeared at the party to meet and collect their backgrounds. Stamps were not out at this time. (They were released on July 26th 2010)

The free item for everyone at this party was the Blue Headphones, located at the Cove. Members could get a free Music Jam Shirt (red with music notes on it) at the Backstage room, with the entrance to the room being at the Dock. Like usual members could also purchase some items (shirts and the All Access Pass) at the Snow Forts and some musical instruments in the Backstage room, with more being added to the catalogue a week later on July 15th. The final free item for members was the Boombox on the Nightclub’s roof. 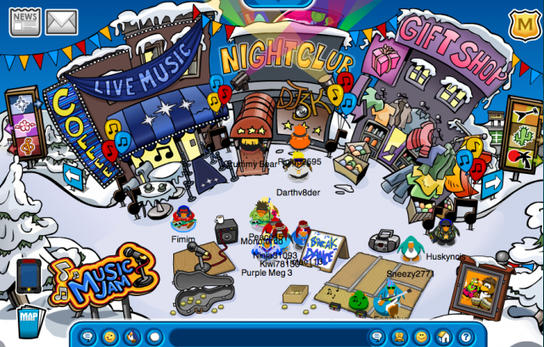 Other minor updates on this date in 2010 also includes the postcard catalogue being updated (Band Practice, Watch My Band Play, Wanna Join my Band, Your Biggest Fan, and Jam With Me) and a new login screen to advertise the party.

Please note that the picture above was taken by Fimim, as during this time I was taking a partial break from Club Penguin. The images from him have been used on the website with permission.