For the past three weeks on Club Penguin I have been having issues with the new field op mission each and every week. The first week it was unfixable. (I completed the field op shortly before the new one was released so Club Penguin’s systems read it as me doing the new one, thus rendering me unable to do the new one that came out several hours later)

Last week and this week (field ops 86 and 87) there have been other field op bugs for me ans well as others. The bug is they don’t appear – at first, anyway. No matter what penguin I’ve gone on that I own (I’ve tried it on three) I’ve had this issue where while there is a new field op mission, the spy phone is blank and not blinking.

Checking the EPF Command Room for orders anyway says the objective is complete even though it isn’t, too. 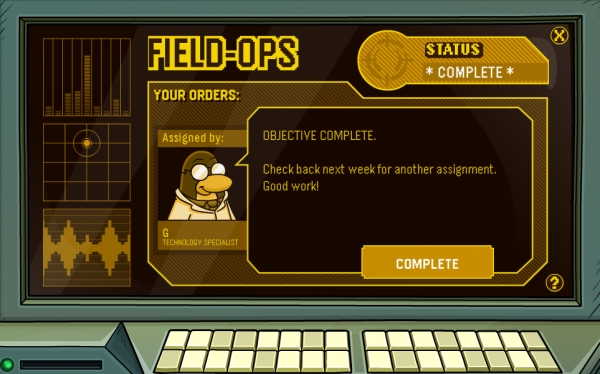 Want to fix this? Simply log off and log back on to Club Penguin. You should then be greeted with a blinking spy phone and can then get your orders from Gary.

I don’t know what the issue is – I don’t this is a cache issue, since I’ve had to do this on the same computer with multiple penguins – if it was a cache issue, it would be fine after the first penguin has the new field op mission appear for it.

While this fix is being posted several days after the new field op and many of you with this issue have probably figured out this fix, but if not, here you go.

If all else fails you can try clearing your web browser’s cache, and if the field op is still not appearing I recommend you email Club Penguin Support at that point.

Back to being undercover!

Cross posted on my other website, Club Penguin Bugs.