Note: Yeah, I know this is the same date as Club PenguinCP and Tommy23456. Tommy was first (CheatsWhiz and I did not know when planning) and CPCP announced theirs after ours, so you’ll have to switch parties or decide which one to go to. Sorry for any inconvenience, but I hope to see you there! Worst case scenario I’ll have a second party, mainly for those who cannot make it due to time zone differences.

As some of you may know, my birthday is this Thursday on June 21st. It might not be the age you expect me to be turning, but I’ll be 17. Yeah, I was born alllll the way back in 1995. A lot of you are probably half my age, eh? :P Anyway, on Saturday the 23rd I will be celebrating on Club Penguin alongside CheatsWhiz, another Club Penguin Blog I have been working at for a while. Here are the details: 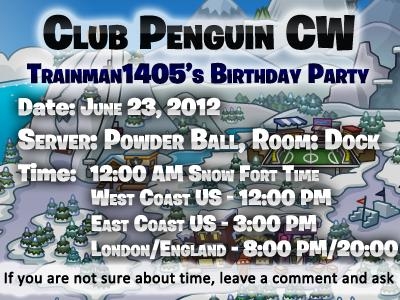 A coin code will also be given away on CheatsWhiz (NOT this website) after the party thanks to 9johncena. I hope to see you there!

By the way: some of you have asked if you could get me anything such as a coin code for my birthday – please don’t! I’m humbled and flattered that you guys and gals would get me something, but you don’t need to. :) Plus I’d feel bad for taking something that you purchased with your hard earned money! So yeah. I hope to see you at the party! I know I’ll be having lots of fun. Maybe we can fill a couple of rooms?

164 thoughts on “My Club Penguin Birthday Party Invitation (PARTY OVER)”