Just like every year, Club Penguin will most likely have their annual Holiday/Christmas Party. This party, just like the Halloween Parties, started in 2005. The first ever free items at the Christmas Party were the Santa Hat and Christmas Scarf. In 2007 Club Penguin started their yearly Coins For Change Tradition, that goes on around the Holidays too. Penguins can donate coins which will determine how One Million Dollars ($1,000,000) will be split between charities to help people and the planet. 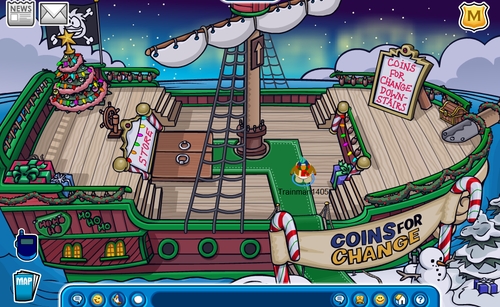 In 2008 the Christmas Party was renamed to the Holiday Party since not everybody celebrates Christmas. They still keep the usual decorations such as red & green banners, lights, trees, and candy canes. Rockhopper always makes an appearance too, as he loves Coins For Change. Rumor has it this year he will have a special background to give out. What do you think Club Penguin has in store for the party this year? Do you think the Sleigh Ride will return? I guess we’ll know in six months, as the Christmas Party will most likely come out December 22nd or 23rd.