On the 3rd of May Club Penguin has updated in 2011 and 2012. In 2011 the beta team was released, and in 2012, in addition to the beginning of the month updates such as a new edition of the Penguin Style, there was also a new pin hidden on the island, a new field op mission, a new login screen, and a new log off screen.

Jumping ahead one year, the biggest update on this day in 2012 was a new clothing catalogue. A usual tradition for May around this time period, the catalogue contained medieval themed items. In total there was five new pages of items, plus six hidden items. 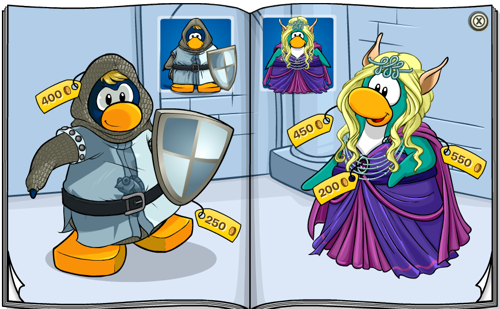 Another update on this day in 2012 was a new pin being hidden on the island. The Black Helm Pin, Club Penguin’s 203rd pin overall, was hidden at the Cove. It is the ninth pin to be hidden in that room.

Also on this day in 2012 the 80th field op mission was released. Gary’s orders were the following:

Last week, we investigated reports of cream soda missing from the Pizza Parlor. A note was left, signed by Rookie, but was not written by him. These may be the clues we’ve been waiting for, but we need more. Go to the Ski Hill, connect to the EPF antenna, and look for any unusual signals.

The mission was completed by breaking the code, which was done by scanning symbols to find the correct combination.

The final two updates on this day in 2012 have  to do with logging in and out. A new login screen advertising the upcoming Medival Party was added, saying “Heroes Needed. Medieval Party May 17 – 29”. There was also a new logoff screen, this one saying “New igloo items on Thursday!”