The third and final igloo related update in 2007 was the start of an igloo contest. Members could decorate their igloo and submit it for reviewal, and the ten chosen winners would have 10,000 coins added to their account and their igloo featured in the newspaper. Here’s Billybob’s blog post: 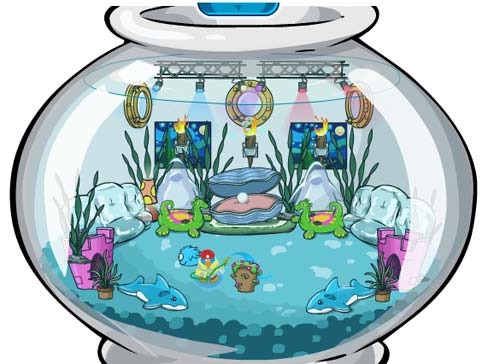 I hope you’re all enjoying the party and the new free item! When it came time to making a new igloo catalog, we decided to keep the water theme going so you could make your own aquarium igloo! And what better way to show off your igloo to everyone in Club Penguin than with an igloo contest! Be sure to check out the newspaper for more details!

In other news: The water party will end on Monday, but there is even more cool stuff planned for the summer. Get ready for a brand new camping party, another game update, and of course, a brand new mission! But I can’t say anymore than that right now.

Aside from the igloo updates in 2007, there was also a new pin hidden. The Cart Pin (cart from Cart Surfer) was hidden at the Pizza Parlour. This pin is Club Penguin’s 37th pin overall and was the third pin to be hidden in that room. This brings us to our fifth and final update in 2007. Cart Surfer was updated with some new tricks. You could now do a handstand on your cart and hold the cart up and run down the track with it in your flippers. It’s possible there was a third new trick but I don’t remember.

Finally, there’s 2014. That year two more items were now available for collection at the Music Jam. All players could collect the Glitter Microphone and members could collect up to 40 Drum Roll Puffle Hats.