Updates on the second of March have happened in 2006 and 2007. In 2006 Club Penguin made some behind-the-scenes adjustments to speed up loading times and they also added some new emotes to the game.

In 2006 an update to the game’s login system was released to speed up loading times. Two new emotes were added: the pizza emote and the toot emote.

In 2007 the Shrimp Pin, Club Penguin’s 27th pin, was hidden. It could be found in the Dance Lounge, now known as the Arcade. It was the second pin to be hidden in that room. Also on this day in 2007 the clothing catalogue was updated for the month. Lots of spring-related clothes were released. Some of the items in the March 2007 Penguin Style include the Yellow Raincoat, Pink Duffle Coat, Trendy Sunglasses, Shamrock Dress, and Leprechaun Tuxedo. This was the second appearance of the Yellow Raincoat in the Penguin Style. 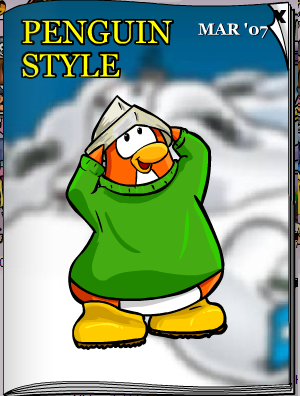